Microglia are a minority among brain cells, but a new study in mice is adding to the evidence that these “trash collector” cells may have a mightier role in brain health and disease, and could provide clues to new treatment targets for neurodegenerative diseases such as Alzheimer’s. Funded in part by NIA and published in Nature, this latest research suggests there is a microglia-driven negative feedback mechanism that is modifying how neurons act. 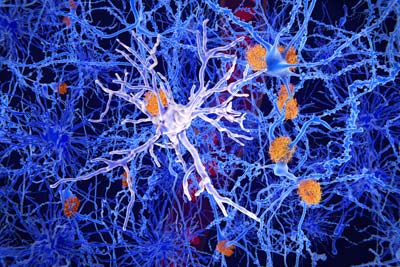 Neurons, which make up about 50% of brain cells, have long been viewed as the drivers of brain processes, such as thoughts and behavior. Meanwhile microglia, representing only about 10% of brain cells, have been seen as the clean-up crew. For their job as the brain’s immune cells, microglia remove dying neurons, prune synapses, and generally support the survival of neurons.

A research team at the Icahn School of Medicine at Mount Sinai performed a series of experiments in mice, including the removal of microglia from specific brain regions. Led by Anne Schaefer, M.D., Ph.D., Professor of Neuroscience and Psychiatry, and a 2012 NIH Director’s New Innovator Award Recipient, researchers compared neuronal responses to different insults and controls. When the microglia were removed, at first the neurons were fine, but then went haywire, showing a seizure response to insults.

The findings show a circuit between neurons and microglia that involve the molecule adenosine triphosphate (ATP). When neurons are active, they release ATP, which attracts microglia. The microglia in turn break down ATP into forms of adenosine, which suppress synaptic transmission and neuron activity. Without microglia, or when microglia don’t respond to ATP, the seizure response kicks in with excessive neuronal activity.

The researchers also looked at this circuit in an Alzheimer’s disease mouse model and saw the same seizure response. They hypothesize that this type of microglia-induced neuromodulation may go awry in neurodegenerative diseases, including Alzheimer’s and Huntington’s, and contribute to increases in neuron excitability and behavior changes that are associated with those disorders. Targeting the microglia system could potentially be a therapeutic protecting the brain from abnormal activation seen in neurodegenerative diseases.

As a next step, Dr. Schaefer and colleagues are starting to investigate the epigenetic mechanisms of microglia activation during aging and its contributions to neurodegenerative diseases. NIA recently awarded the Icahn School of Medicine at Mount Sinai a $2.99 million grant (number RF1AG068558) toward this effort targeting microglial epigenetic regulators specific to inflammation.

These activities relate to NIH’s AD+ADRD Research Implementation Milestone 2.A, "Create new research programs that use data-driven, systems-based approaches to integrate the study of fundamental biology of aging with neurobiology of aging and research on neurodegeneration, AD and AD-related dementias to better understand the mechanism(s) of vulnerability and resilience in AD across all levels of biologic complexity (from cellular to population level) and to gain a deeper understanding of the complex biology and integrative physiology of healthy and pathologic brain aging." They also relate to Milestone 2.B, "Establish new research programs that employ data-driven, systems-based approaches to understand the interaction between peripheral systems (in particular: immune, metabolic, microbiome) and the brain and the impact of this interaction on brain aging and neurodegeneration. These efforts should integrate human and animal model research and characterize the extent to which molecular (epigenomic, transcriptomic and metabolomic) variation identified in peripheral tissues can be used as a proxy for inter-individual variation in the trajectories of brain aging, AD and AD-related dementias."