As some people grow older, their memory function declines over time, while others retain a healthy performance on memory tests into old age. The same variability is true for lab rats: A new NIA study shows that memory in aged rats with cognitive impairment improved after transcranial magnetic stimulation (TMS), while cognitively healthy ones did worse after TMS. The findings, published recently in Brain Stimulation, suggest the need for a personalized, tailored approach to developing TMS therapies for people. 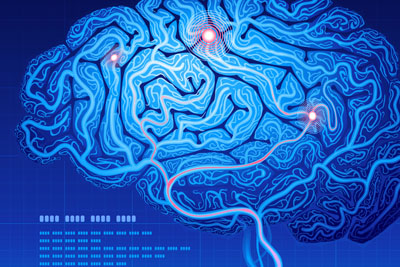 TMS is delivered through a device that’s slightly larger than a ping-pong paddle. The device contains a figure-eight-shaped coil of wire that emits a painless magnetic pulse. When positioned close to the scalp, TMS stimulates select regions of the brain. Already FDA approved for treating migraine headaches, depression, and obsessive-compulsive disorder, TMS is being studied in animals for treating cognitive impairment caused by Alzheimer’s disease and related dementias.

For the experiment, NIA investigators used a water maze test to classify young and aged lab rats as cognitively impaired or unimpaired. Next, the team provided rats with two small vials containing the same odor. Rats are very olfactory-focused and naturally spent a lot of time investigating the identical smelly vials. Approximately 50% of the rats then received TMS, and the others were given a control/sham treatment without magnetic pulses directed at the brain. The next day, the rats again had two vials to explore, but this time, one of the vials contained a new, different odor. Rats with good memory function spent more time exploring the new odor.

As expected, control-treated animals that showed age-related memory impairment in the water maze also showed deficits in the odor test. The pattern of TMS results was clear: Cognitively impaired aged rats benefited substantially from TMS treatment, with their memory performance boosted to levels similar to those of young animals. The researchers hypothesized that TMS helped rats with already damaged memory abilities to engage their residual neural plasticity and do some compensatory rewiring of brain connections. This is somewhat similar to how people who have had a stroke can relearn tasks through targeted cognitive and physical therapies.

The flip side of this study, however, was a bit surprising: Aged rats with good results on the water maze and the olfactory test showed dramatic memory deficits after the same TMS protocol. The research team speculated that in cognitively unimpaired aged rats, the TMS treatment may have perturbed the brain’s natural balance to thwart age-related decline.

Because of the different results among cognitively impaired and unimpaired aged animals, more research is needed before testing this device in people. The investigators cautioned that TMS techniques that have proven safe in healthy younger people might have unexpected or even adverse effects on older adults’ brains compromised by aging and/or neurodegenerative disease.

A major study limitation was the use of the same TMS stimulator for rat models that is used in human TMS studies. Although the investigators tried to target the brain region important for memory, it was challenging to be precise in a rat with a human-sized device.

The team hopes to expand this work into long-term studies of lab rat populations to help identify biomarkers that can give an earlier alert for possible risk of poor cognitive aging outcomes and help develop personalized interventions based on an individual’s neurobiological and cognitive condition.