Osteoarthritis is the most common type of arthritis. It’s a joint disease that results when cartilage, the tissue that cushions the ends of the bones, breaks down. Cartilage can sometimes wear down so much that the bones start to rub together. People with osteoarthritis can have joint pain, stiffness, or swelling. Some develop serious pain and disability from the disease. 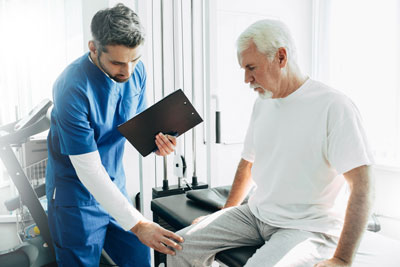 MRI imaging can peer into the fibers that make up cartilage and reveal details about its structure. A research team led by Dr. Shinjini Kundu of Carnegie Mellon University and the University of Pittsburgh and Dr. Gustavo Rohde of the University of Virginia investigated whether artificial intelligence could be used to analyze MRI images for early signs of osteoarthritis and predict who will develop the disease. They used MRI scans from 86 people who had no initial symptoms or visual signs of disease. About half the participants developed osteoarthritis after three years.

The team used a technique they developed called three-dimensional transport-based morphometry (3D TBM) to identify biochemical changes, such as how much water is present, in cartilage using MRI scans. Using 3D TBM, they analyzed baseline “cartilage maps” of the participants’ knees. After three years, they compared the cartilage maps for the participants who were eventually diagnosed with osteoarthritis with those who were not.

Using machine-learning algorithms, the team trained the system to automatically differentiate between people who would progress to osteoarthritis and those who wouldn’t. The technique detected specific biochemical changes in the center of the knee’s cartilage of those who were presymptomatic at the time of the baseline imaging, including decreases in water concentration. The system accurately detected 78% of future osteoarthritis cases.

“The gold standard for diagnosing arthritis is X-ray. As the cartilage deteriorates, the space between the bones decreases,” says study co-author Dr. Kenneth Urish of the University of Pittsburgh. “The problem is, when you see arthritis on X-rays, the damage has already been done.”

More studies are needed to determine whether 3D TBM could be useful as a clinical tool to predict who may develop osteoarthritis and benefit from early interventions.