Older adults with a weaker handgrip were more likely to be cognitively impaired than those with a stronger grip, according to an NIA-funded study in the Journal of Alzheimer’s Disease. The findings suggest that handgrip strength may be a potential low-cost, easy way to help detect cognitive impairment and, in combination with other measures, to identify people who may benefit from early interventions. 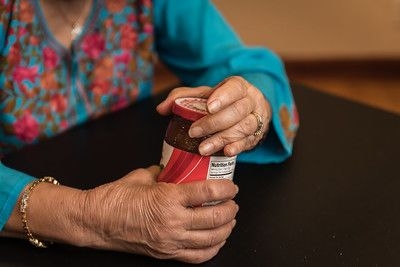 A team led by researchers from North Dakota State University looked at data over an eight-year period from almost 14,000 people, age 50 or older, in the NIA-supported Health and Retirement Study. A handheld instrument called a dynamometer was used to assess handgrip strength, and a modified screening tool from the Mini-Mental State Examination was used to measure cognitive function every two years. Of the 13,828 participants who were assessed, 1,309 had some degree of cognitive impairment.

As people age, they lose muscle mass, resulting in a weaker grip. Grip strength also can weaken due to age-related changes in parts of the brain that coordinate movement. These same areas of the brain also correspond to cognition, the researchers note. The neural and motor functions needed for the grip strength test may become compromised when cognitive impairment starts, they explain.

Previous studies investigating the relationship between cognitive function and grip strength have shown mixed results, likely due to smaller numbers of participants and varied assessments across studies making it difficult to combine data. Future research is needed to further explore the connection between grip strength and cognition, for example, investigating any associations with structural changes in the brain.

If validated, grip strength could be an easy test used by doctors to help distinguish cognitive dysfunction from normal age-related decline, the researchers noted. It also may have the potential to be used during clinical trials to gauge the effectiveness of interventions meant to prevent or delay cognitive impairment.