The Tsimane, an indigenous people of the Bolivian Amazon, have significantly less brain atrophy than their aging peers in the United States and Europe, according to an international study supported in part by NIA. The aging-associated decrease in brain volume, or atrophy, is approximately 70% slower in the Tsimane than in Western industrialized adults, according to a study published in the Journals of Gerontology, Series A: Biological Sciences and Medical Sciences. 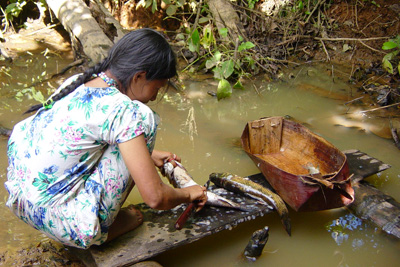 The Tsimane people have a preindustrial lifestyle that includes farming, hunting, gathering, and fishing. They are very physically active and eat a diet rich in fiber and healthy fats from fish, with few preservatives. A study published in 2017 found that the Tsimane essentially have the healthiest hearts in the world, with the lowest reported levels of coronary artery disease of any population. However, their traditional lifestyle and lack of access to modern health care exposes them to frequent infections and parasites that cause high levels of inflammation throughout the body, a known risk factor for brain atrophy.

For the current study, researchers sought to determine if the Tsimane’s high rates of inflammation would be associated with changes in the brain or if their robust heart health would slow the rate of brain atrophy. The study included 746 Tsimane participants, aged 40 to 94, who underwent CT scans. Researchers provided bus transportation – up to two days in some cases – to the closest CT imaging facility. While MRI would have been the preferred method for measuring brain volume, it was not logistically feasible for this study. Using the CT head scan measurements, the researchers calculated the brain volume for each participant and plotted against age to determine the rate of brain atrophy for the aging Tsimane.

Next, the researchers compared the Tsimane results with earlier studies measuring brain volume, which used MRI scans, on industrialized populations in the United States, Germany, and the Netherlands, who have higher rates of cardiovascular disease. To confirm that the CT methodology used for the Tsimane compares with the MRI scans, the researchers validated their brain measurement methodology for both instruments and found that they produced similar brain volume results. The comparison revealed a stark difference, with the Western populations exhibiting a 70% faster rate of brain volume decline with aging than the Tsimane. According to the research team, these results suggest that brain atrophy may be slowed substantially with a heart-healthy lifestyle and that cardiovascular fitness may be more important for healthy brain aging than the harmful effects of inflammation.

While noting the study’s limitation of comparing CT-derived and MRI-derived brain volumes, the researchers suggest that the results spotlight the value of a heart-healthy lifestyle to support brain health, even in the presence of chronically high inflammation. In addition, these results provide further evidence of the potential link between cardiovascular disease and the risks of cognitive decline and dementia.

This research was supported in part by NIA grants RF1-AG-054442.