Through a large-scale analysis of tissue samples, NIA-funded researchers have discovered new disease-related changes in the brains of people who had died with Alzheimer’s disease. The study results, published in Nature Neuroscience, underscore the key role proteins may play in disease progression. Understanding these changes could help identify therapeutic targets and biomarkers for the disease. 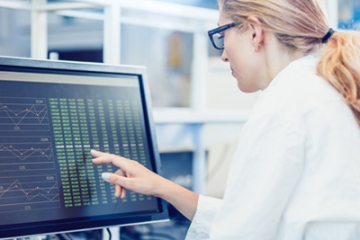 For decades, scientists have known that much of the damage that underlies Alzheimer’s is ultimately carried out by changes in brain proteins. However, to get a better understanding of which changes may happen in the brains of most patients, scientists often measure the levels of ribonucleic acid (RNA) instead of proteins. Shaped like DNA, RNA often relays the genetic blueprints for proteins from a cell’s chromosomes to its protein-making machinery. Because RNA is easier to work with, scientists have relied on it as an indirect readout of global changes in protein levels when conducting large-scale studies, involving hundreds of brain samples. In this study, the researchers found that directly measuring protein levels on a large scale may reveal important clues to understanding Alzheimer’s that cannot be detected by analyzing RNA alone.

The research team — located at Emory University School of Medicine, part of the Accelerating Medicines Partnership® Program for Alzheimer’s Disease (AMP®-AD) Consortium — used advanced automated techniques to compare the levels of both proteins and RNA molecules in more than 1,000 brain tissue samples. The samples came from the postmortem brains of people who had Alzheimer’s, as well as from individuals who died from other, unrelated causes.

The team discovered several protein networks that may play an important role in Alzheimer’s. Specifically, they found 44 groups of proteins — termed “protein communities” — for which levels rose or fell in coordinated ways across the brains of people with Alzheimer’s, but not in a control group of people who had not had the disease.

Interestingly, only about half of these changes were observed when the researchers compared the protein communities to the corresponding RNA molecules. This finding suggests that there are important steps in the Alzheimer’s process that happen after a protein’s genetic blueprints are sent to a cell’s protein-making machinery.

Next, the researchers paid particular attention to two groups of protein communities that were not detected at the RNA level. One was associated with Mitogen-Activated Protein Kinase (MAPK) signaling and energy metabolism. Changes in these proteins appeared to be associated with changes in the thinking and memory problems seen during Alzheimer’s. The second community had changes that correlated to the early stages of the disease when amyloid and tau begin to accumulate in the brain.

The study results highlight the importance of directly analyzing proteins along with RNA to gain a more complete picture of how Alzheimer’s may damage the brain. The research team plans to use these results as a basis for developing new, more effective diagnostic tests and treatments for Alzheimer’s.

These activities relate to NIA’s AD+ADRD Research Implementation Milestone 2.G, “Maximize the translational potential of genetics research by ensuring rapid and broad sharing of large-scale genetic/genomic data, similar to the open science, data sharing model of the AMP AD program and by supporting programs focused on: Understanding the mechanisms by which genetic variants (including ApoE) discovered through GWAS and sequencing studies influence AD risk; integrating genomic data with other multi-omics data from brain, peripheral tissues, and iPSC cellular models from well-phenotyped cohorts; establishing the gene-basis and directionality for genetic variant association so gene networks can be annotated with causality as tools for drug discovery.”