In the largest study to date of proteins related to Alzheimer’s disease, a team of researchers has identified disease-specific proteins and biological processes that could be developed into both new treatment targets and fluid biomarkers. The findings suggest that sets of proteins that regulate glucose metabolism, together with proteins related to a protective role of astrocytes and microglia — the brain’s support cells — are strongly associated with Alzheimer’s pathology and cognitive impairment. 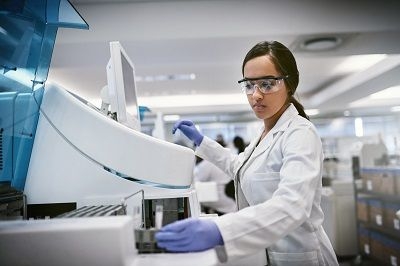 The study, part of the Accelerating Medicines Partnership for Alzheimer’s Disease (AMP AD), involved measuring the levels and analyzing the expression patterns of more than 3,000 proteins in a large number of brain and cerebrospinal fluid samples collected at multiple research centers across the United States. This research was funded by the National Institutes of Health’s National Institute on Aging (NIA) and published April 13 in Nature Medicine.

“This is an example of how the collaborative, open science platform of AMP AD is creating a pipeline of discovery for new approaches to diagnosis, treatment and prevention of Alzheimer’s disease,” said NIA Director Richard J. Hodes, M.D. “This study exemplifies how research can be accelerated when multiple research groups share their biological samples and data resources.”

The research team, led by Erik C.B. Johnson, M.D., Ph.D, Nicholas T. Seyfried, Ph.D., and Allan Levey, M.D., Ph.D., all at the Emory School of Medicine, Atlanta, analyzed patterns of protein expression in more than 2,000 human brain and nearly 400 cerebrospinal fluid samples from both healthy people and those with Alzheimer’s disease. The paper’s authors, which included Madhav Thambisetty, M.D., Ph.D., investigator and chief of the Clinical and Translational Neuroscience Section in the NIA’s Laboratory of Behavioral Neuroscience, identified groups (or modules) of proteins that reflect biological processes in the brain.

The researchers then analyzed how the protein modules relate to various pathologic and clinical features of Alzheimer’s and other neurodegenerative disorders. They saw changes in proteins related to glucose metabolism and an anti-inflammatory response in glial cells in brain samples from both people with Alzheimer’s as well as in samples from individuals with documented brain pathology who were cognitively normal. This suggests, the researchers noted, that the anti-inflammatory processes designed to protect nerve cells may have been activated in response to the disease.

The researchers also set out to reproduce the findings in cerebrospinal fluid. The team found that, just like with brain tissue, the proteins involved in the way cells extract energy from glucose are increased in the spinal fluid from people with Alzheimer’s. Many of these proteins were also elevated in people with preclinical Alzheimer’s, i.e., individuals with brain pathology but without symptoms of cognitive decline. Importantly, the glucose metabolism/glial protein module was populated with proteins known to be genetic risk factors for Alzheimer’s, suggesting that the biological processes reflected by these protein families are involved in the actual disease process.

“We’ve been studying the possible links between abnormalities in the way the brain metabolizes glucose and Alzheimer’s-related changes for a while now,” Thambisetty said. “The latest analysis suggests that these proteins may also have potential as fluid biomarkers to detect the presence of early disease.”

In a previous study, Thambisetty and colleagues, in collaboration with the Emory researchers, found a connection between abnormalities in how the brain breaks down glucose and the amount of the signature amyloid plaques and tangles in the brain, as well as the onset of symptoms such as problems with memory.

“This large, comparative proteomic study points to massive changes across many biological processes in Alzheimer’s and offers new insights into the role of brain energy metabolism and neuroinflammation in the disease process,” said Suzana Petanceska, Ph.D., program director at NIA overseeing the AMP AD Target Discovery Program. “The data and analyses from this study has already been made available to the research community and can be used as a rich source of new targets for the treatment and prevention of Alzheimer’s or serve as the foundation for developing fluid biomarkers.”

Brain tissue samples came from autopsy of participants in Alzheimer’s disease research centers and several epidemiologic studies across the country, including the Baltimore Longitudinal Study of Aging (BLSA), Religious Orders Study (ROS) and Memory and Aging Project (MAP), and Adult Changes in Thought (ACT) initiatives. The brain collections also contained samples from individuals with six other neurodegenerative disorders as well as samples representing normal aging, which enabled the discovery of molecular signatures specific for Alzheimer’s. Cerebrospinal fluid samples were collected from study participants at the Emory Goizueta Alzheimer’s Disease Research Center. These and other datasets are available to the research community through the AD Knowledge Portal, the data repository for the AMP AD Target Discovery Program, and other NIA supported team-science projects operating under open science principles.

This press release describes a basic research finding. Basic research increases our understanding of human behavior and biology, which is foundational to advancing new and better ways to prevent, diagnose, and treat disease. Science is an unpredictable and incremental process — each research advance builds on past discoveries, often in unexpected ways. Most clinical advances would not be possible without the knowledge of fundamental basic research.