At the intersection of arts and aging

Many people enjoy some kind of arts activity. Whether it’s singing in a church choir, attending the performance of a play, visiting an art museum, or tap dancing along with a Fred Astaire movie, participating in the arts makes many of us feel good. 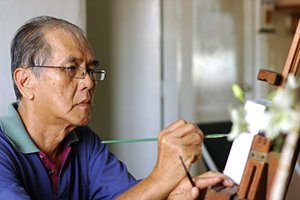 But does it have any effect on the health and well-being of older people? Does it make a difference if you listen to music or play music? How often do you need to engage in some kind of arts activity—every day, once a week, twice a month, every once in a while? Can participating in an arts activity slow or stop cognitive decline?

To explore such questions about the arts as a possible promoter of good health, NIA has teamed up with the National Endowment for the Arts (NEA), the National Center for Complementary and Alternative Medicine (NCCAM) at NIH, and the NIH Office of Behavioral and Social Science Research (OBSSR).

“There are many research questions about aging and the arts,” said NIA Deputy Director Dr. Marie Bernard. “Anecdotally, there are stories about how much older people benefit from the arts. Many long-term care and senior centers have arts programming. On the face of it, this would seem to be valuable, but we don’t have an evidence base that they work.”

In March 2011, the U.S. Department of Health and Human Services and the NEA hosted a meeting to discuss research on the arts and human development. The goal was to find ways to use the arts to improve people’s lives. Participants encouraged a federal partnership to promote research and recommended a literature review and gap analysis to identify areas for future research.

A Federal Interagency Task Force on the Arts and Human Development was created to encourage more and better research on the role that the arts might play in helping people reach their full potential at all stages of life. In November 2012, the NEA, NIA, NCCAM, and OBSSR hosted a workshop at the National Academy of Sciences to review the current state of research on the arts, health, and well-being in older Americans.

“Maintaining health and independence are critical elements for older people to live in their own homes and communities,” said Dr. Lis Nielsen, chief of the Individual Behavioral Processes Branch in NIA’s Division of Behavioral and Social Research. “We know that health and well-being are not just addressed in the clinic or doctor’s office, but through interventions in people’s everyday lives. Participating in the arts is one way to intervene, and NIA sees many opportunities for research that can deepen our understanding of the relationship of arts to health in aging.”

NIA has included arts programs in two recent program announcements (PAs): Translational Research to Help Older Adults Maintain their Health and Independence in the Community (R01) and (R21). The goal is to support collaborative, translational research between academic research centers and community-based organizations to develop and test interventions and programs to help older people remain healthy and independent.

Most of the past studies on the benefits of the arts have not met the rigorous standards of scientific research. Shortcomings include:

Recently, NIA funded an arts-related project led by Drs. Tony and Helga Noice of Elmhurst College in Elmhurst, IL. The researchers are expanding a theater training program for older people, which in initial studies showed improved cognition and social engagement for participants. 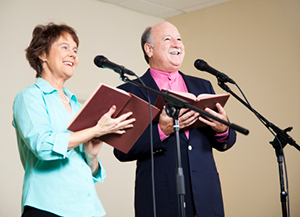 “We began our program in retirement homes in the Chicago area,” said Dr. Helga Noice, a psychologist. “We asked residents to sign up for a singing class, acting class, or waiting-list control group. We randomly assigned them to one of the three groups, but didn’t tell them in advance which one they were getting so that we didn’t bias the selection.”

Dr. Tony Noice, an actor and educator, conducted the theater training classes, which usually had between 16 and 20 participants in each of the treatment and control groups. Participants ranged in age from 65 to 94, with most in their 70s. Eight 1-hour sessions were held over a 4-week period. Participants were tested on measures of cognition, psychological health, and observed tasks of daily living plus a quality-of-life scale.

“On the objective cognitive measures, the acting group improved more than the singing group and the control group,” said Tony Noice. “On the quality-of-life measures, singing showed the same improvement as acting. There was also a social benefit.” Another study, comparing visual arts and acting produced similar results, and some 4 months after the training, the researchers found that the improvement had not declined.

The Noices are currently extending this research with colleagues at the University of Illinois in Urbana-Champaign. They have added functional MRI scans before and after the training program to document brain changes. “We want to see if the anticipated areas of the brain show physical change,” notes Helga Noice. “We will follow participants for at least 6 months to see if they retain the cognitive benefits of the training.”

“We believe this program can be implemented fairly easily on the community level,” said Tony Noice. “If a university psychology department collaborates with the theater department, it’s a good opportunity for junior faculty and graduate students to gain experience in conducting a research project. Acting is a particularly good choice for this type of program. Most other arts activities like playing a musical instrument, singing, or dancing, require some previous training or talent. With acting instruction, you just have to be able to walk, talk, and think.”

If a program is going to seek future funding and be adopted in a wider community, it needs to show that it has a proven health benefit and can be cost-effective. Only a few previous studies have included a cost-benefit analysis.

“If arts programs do improve the health and well-being of older people, they need to be accessible,” noted Dr. Nielsen. “One way to make them accessible is to make them affordable. We need to find out the costs involved in making arts programs available to older people. Also, in these tight economic times, we need to be able to show public and private funders that their dollars are being put to good use.”

Another critical element of the program is collaboration between academic researchers and community-based arts programs. Artists and researchers think differently and approach problems in ways unique to their disciplines. Working together on developing an arts program for older adults provides the opportunity for these groups to learn from each other, as well as from other involved professionals.

“We need academic and community partnerships,” commented Dr. Bernard. “There are dedicated people in the arts and aging who should partner with the academics. This is an opportunity to bring people together in interdisciplinary teams from different aspects of aging research. Researchers in neuroscience, geriatrics, and psychology can work with professionals from music, theater, dance, and other art forms on different issues.”

The PAs will remain open until May 2014. See the specific funding announcements for details and application deadlines.