T cells, which are key players in the body’s immune system, may be involved in the degeneration of neurons in Lewy body dementia, according to an NIA-supported study. Researchers at Stanford University and Northwestern University identified how a certain type of T cell, which is involved in autoimmune diseases, may travel to the brain to destroy neurons. The findings, published Nov. 12 in Science, suggest that drugs already used to treat certain autoimmune diseases may block this undesired T-cell activity. 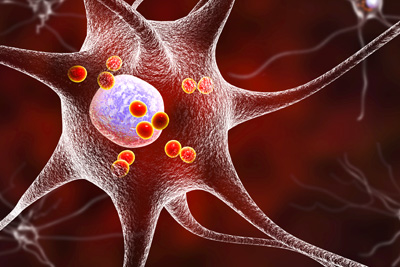 Experts estimate that about 1 million Americans have Lewy body dementia, making it one of the most common forms of dementia. Its hallmark signs are abnormal deposits of alpha-synuclein protein in the brain and the degeneration of neurons.

Previous research found that people with Lewy body dementia had T cells in their blood that were able to react against alpha-synuclein. This finding suggested that rather than protecting the body from foreign invaders, the immune system could play a part in causing Lewy body dementia.

The Stanford and Northwestern research team set out to determine how T cells could be involved in the degeneration of neurons. For the study, the team analyzed blood, spinal fluid, and brain tissue samples donated by research participants at the NIA-funded Alzheimer’s Disease Research Centers at Stanford and the University of California, San Diego. About 310 participants were examined and diagnosed as healthy or as having Lewy body dementia, which includes Parkinson’s disease dementia and dementia with Lewy bodies.

Next, the team found evidence of the CXCR4 protein in T cells in brain samples, as well as higher than normal levels of CXCL12 protein in the spinal fluid of people with Lewy body dementia. Together, CXCR4 and CXCL12 may play a role in driving the migration of T cells into the brain. The team proposed how these T cells could travel to the brain, react against the abnormal alpha-synuclein deposits, and secrete an inflammatory substance, leading to neurodegeneration in people with Lewy body dementia.

This new information about the disease process could help investigators find effective treatments for Lewy body dementia. For example, therapies currently used for certain autoimmune diseases can turn off the CXCR4-CXCL12 mechanism and may prevent these specific T cells from entering the brain to destroy neurons.