Alzheimer’s disease is the most common cause of dementia among older adults. The loss of cognitive functioning — the ability to think, learn, remember, and reason — can have devastating effects on patients and their families. 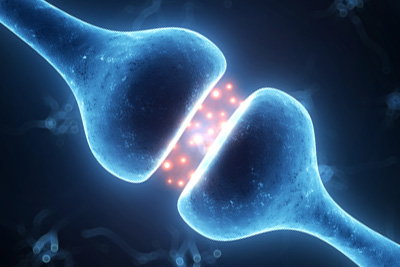 As Alzheimer’s gets worse over time, plaques and tangles of proteins build up in the brain. These are thought to eventually cause the loss of connections between nerve cells, called synapses. Researchers think that this decrease in synaptic density causes the progressive symptoms of the disease.

Until recently, scientists have not been able to study synaptic density in the living brain. A compound has been developed for use with positron emission tomography, or PET scanning, that can safely reveal living synapses. This tracer binds to a protein found within synapses called glycoprotein 2A.

Researchers led by Drs. Adam Mecca and Christopher van Dyck from the Yale University Alzheimer's Disease Research Center examined 45 people between the ages of 50 and 85 in a new study of this tracer. The participants had early-stage Alzheimer’s, identified by cognitive testing and imaging of plaque buildup in the brain.

The team then compared the associations between test scores and cognitive density as measured by the PET scans. The study was funded in part by NIH’s National Institute on Aging (NIA). Results were published on Feb. 17, 2022, in Alzheimer’s & Dementia.

For comparison, the researchers tested the ability of gray matter volume to predict cognition. Gray matter is the outer layer of the brain, which normally has a high density of neurons. Reduced gray matter volume predicted poorer test scores in two of the five areas of cognition. This indicates that measuring the loss of synapses can better capture the brain changes that impact cognitive functioning.

“Imaging synaptic density may be a way to detect Alzheimer’s early, before symptoms develop,” Mecca says. “It might also be used to assess experimental prevention and treatment approaches.”

The study only took a snapshot of synaptic density at a single point in time. Longer studies are needed to image people over time as Alzheimer’s dementia develops. Such studies could show whether loss of synaptic density can predict a decline in cognitive health.