Imaging of brain synapses could be novel test for Alzheimer's 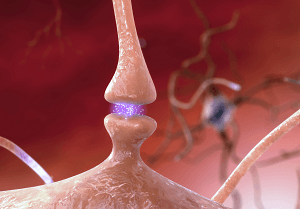 In an exploratory study, researchers at Yale University and the Yale Alzheimer’s Disease Research Center used brain neuroimaging with positron emission tomography (PET), to measure a specific protein, SV2A, found in synaptic terminals. Neurotransmitter chemicals released from synaptic terminals of one brain neuron, cross a narrow gap (the synapse), and cause the adjacent neuron to turn on or off. Levels of SV2A protein should reflect the density of synapses; however, until this work, measurements of SV2A or synaptic density were only possible in brains of people after they died.

According to an accompanying editorial by Elizabeth Mormino, Ph.D., from the Stanford Alzheimer’s Disease Research Center and William Jagust, M.D., from the University of California, Berkeley, a reliable measure of synaptic density in living people would provide both a better measure of disease progression and could help objectively evaluate treatment response in clinical trials of disease-modifying drugs. Additionally, the authors note that the method might prove useful not only in Alzheimer’s disease, but also other neurodegenerative and psychiatric diseases.

“This is really a breakthrough study,” said Eliezer Masliah, M.D., director of NIA’s Division of Neuroscience, whose work more than 20 years ago, established a relationship between Alzheimer’s symptoms while people were living and the density of synaptic terminals in their brains after they died. “With advances in PET imaging, measuring synaptic density in the brains of living people may provide another approach to studying Alzheimer’s disease.”