Identifying mechanisms that may keep memories sharp in the aging brain

New stem cells in the dentate gyrus section of the hippocampus—the brain structure responsible for memory and learning—grow and integrate with existing cells to make memories stronger and more precise. The new cells compete for space among the intertwined connections of the older neurons; as the brain ages, fewer new cells survive. Researchers led by Amar Sahay, Ph.D., of the Harvard Stem Cell Institute at Massachusetts General Hospital, Boston, showed they can manipulate two of the mechanisms involved in this process, boosting the survival of the new neurons in the brains of mice. The findings were published in Neuron on Sept. 1, 2016.

Supported in part by NIA, the researchers engineered the increase of a protein, Klf9, in older neurons in mice. This increase cleared one-fifth of the spines found on dendrites, a neuron cell structure, and doubled the number of new neurons added to the brain circuitry. When the researchers reversed the process, the old dendritic spines reformed, restoring competition with the new cells in the dentate gyrus. Although the previously integrated neurons remained, no new neurons were added. Similar results occurred when the researchers deleted Rac1, a protein important for dendritic spine growth, in older neurons. In this case, the survival of new neurons increased.

The findings suggest that manipulating these two proteins may enhance hippocampal cell generation in middle-aged and older mice and may result in stronger and more precise memories. More research is needed, but the Klf9 and Rac1 proteins may present promising targets for therapies to prevent cognitive impairment or age-related memory decline. 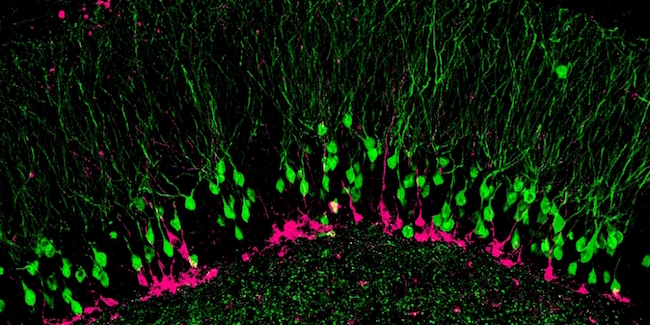