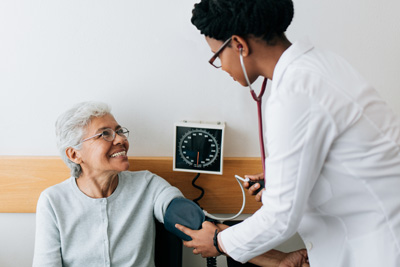 Although midlife hypertension is associated with an increased risk for dementia, this risk in older people has not been well researched. Previous studies have reported a U-shaped association between blood pressure and dementia risk, where both high and low blood pressure are associated with increased risk; however, the evidence for this association is limited. The JAMA Internal Medicine study collected blood pressure, onset of dementia, and mortality data from seven population-based cohort studies, including the NIA-funded Adult Changes in Thought (ACT) study.

This study provides new evidence about how blood pressure affects dementia risk in older people, which previously has not been clearly defined. The researchers note that these observational study results contradict evidence from randomized controlled trials, including the NIA-supported Systolic Blood Pressure Intervention Trial - Memory and Cognition in Decreased Hypertension (SPRINT MIND) study that suggested controlling high blood pressure can reduce dementia risk. They explain that the novel association in this study may be because their cohorts consist of a broader, older population rather than a specific subgroup of older people with high blood pressure and other cardiovascular risk factors.

Since this was an observational study, the study authors suggest further research is needed to understand the cause behind the associations that it found, including randomized controlled trials to find the best strategies for controlling blood pressure in older people. Study co-author Zachary A. Marcum, Pharm.D., Ph.D., at the University of Washington, is a Paul B. Beeson Emerging Leaders Career Development Award in Aging recipient.

This research was supported in part by NIA grant K76AG059929.