A reduction in levels of helpful microbes in the digestive system’s microbiome in animal models can lead to insulin resistance, according to new research conducted by scientists with NIA’s Intramural Research Program. The research was published in the Nov. 14 issue of Science Translational Medicine. 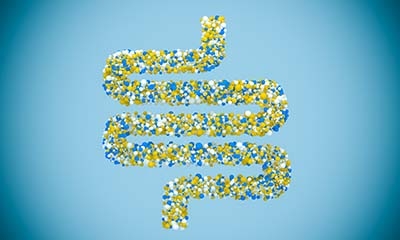 Production and absorption of nutrients depend on microbes living in everyone’s small intestine and colon, particularly in a healthy layer of mucus. The production of mucus is induced by beneficial bacteria called Akkermansia muciniphila, also known as A. muciniphila or Akk. Akk and other friendly microbes thrive in this mucus layer and help the body break down fiber, fermenting it to produce short-chain fatty acids like acetate, propionate, and butyrate, which are vital to cellular signaling in the gastrointestinal tract.

Dr. Arya Biragyn and his colleagues in the NIA IRP’s Laboratory of Molecular Biology and Immunology (LMBI) have been studying the delicate balance of the human microbiome. They recently became intrigued with reports that people of different ethnicities with vastly different diets had similar changes in the gut microbiome as they aged. To understand the relevance of these results in aging-associated pathologies, the team compared intestinal microbes in young and aged mice.

The researchers saw that as mice age, Akk levels drop, while the number of microbes that cause inflammation rise. The researchers then used different techniques, such as antibiotic treatment and replenishment with Akk and their metabolites, in aged mice. They also transferred gut microbes from young and aged mice into germ-free mice, which are specially raised to lack any live microorganisms.

The researchers observed that the decrease of Akk lead to thinning of the insulating mucus layer, causing a decrease in beneficial bacteria and their metabolite butyrate and an increase in levels of harmful bacteria. This caused gut leakiness and a domino effect of inflammatory events that activated the immune system’s white blood cells to convert another kind of immune cell, known as B1aB, into a potentially harmful type called 4BL cells.

The researchers then used the veterinary antibiotic enrofloxacin—to which Akk is resistant—to show that as animals’ Akk levels rebounded, so did their ability to correctly regulate insulin. The researchers found that giving the older animals butyrate was also an effective strategy to block the inflammatory response that leads to insulin resistance. The team confirmed its findings by duplicating the experiment in elderly rhesus macaques, which, similar to older humans, also accumulate 4BL cells and develop insulin resistance.

While still in the early stages, this research suggests that multiple approaches may help people maintain healthy insulin regulation as the digestive microbiome naturally changes with age. In future studies, the IRP researchers plan to take a closer look at the cellular and genetic mechanisms of the interplay among metabolism, inflammation, and the microbiome.

This research was funded and conducted by the NIA Intramural Research Program.