Exercise provides many health benefits, including protection from many diseases. Some people seem to enjoy physical activity more than others. But the mechanisms affecting people’s motivation to exercise are not well understood. 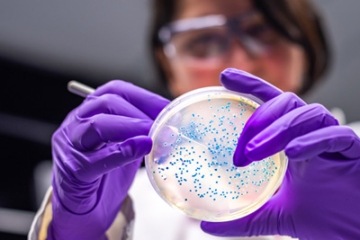 An NIH-funded team of researchers, led by Dr. Christoph Thaiss at the University of Pennsylvania, set out to identify factors affecting exercise performance in mice. Their study appeared in Nature on Dec. 14, 2022.

The researchers first measured how long mice running on a treadmill took to exhaust themselves and how much the mice voluntarily ran on a wheel. They found that the makeup of the gut microbiome — the trillions of microbes living in the gut — predicted these values better than genetic, metabolic, or behavioral traits. When the researchers used antibiotics to eliminate gut microbes, the mice got exhausted earlier and ran less on the wheel.

Motivation is controlled in part by a region of the brain known as the striatum. Neurons in the striatum are activated by the neurotransmitter dopamine. Dopamine activation provides a feeling of reward. The team found that dopamine levels in the striatum increased after exercise in normal mice, but not in microbiome-depleted mice. Treating mice with a drug that blocks dopamine signaling had the same effect on exercise as depleting the microbiome. Conversely, a drug that activates dopamine signaling restored exercise capacity in microbiome-depleted mice.

Activating certain sensory neurons in the gut restored exercise capacity in the microbiome-depleted mice. But when dopamine signaling was blocked, so was the effect of these neurons. The researchers then tested mice engineered to lack these same sensory neurons. They found that the mice had impaired exercise capacity like that of microbiome-depleted mice.

Next, the team screened various compounds produced by gut microbes to see which ones could stimulate gut sensory neurons. They identified a class of compounds called fatty acid amides (FAAs). Supplementing the diets of microbiome-depleted mice with FAAs restored their exercise capacity.

These results suggest that microbiome-produced FAAs in the gut stimulate sensory neurons. Signals from these sensory neurons lead to increased dopamine levels in the striatum during exercise. Dopamine, in turn, enhances the desire for exercise. The findings suggest that the motivation to exercise — or lack thereof — might depend on the state of the gut microbiome. The motivation for exercise, then, might be enhanced by stimulating this sensory pathway.

“If we can confirm the presence of a similar pathway in humans, it could offer an effective way to boost people’s levels of exercise to improve public health generally,” Thaiss says.

This research was supported in part by NIA grant DP2AG067492.