While eyesight often dims with age, a novel mouse study provides intriguing evidence that innovative gene therapy techniques could someday roll back the biological clock for our vision. The research was conducted with NIA and the National Eye Institute support by a Harvard Medical School team and published recently in Nature. 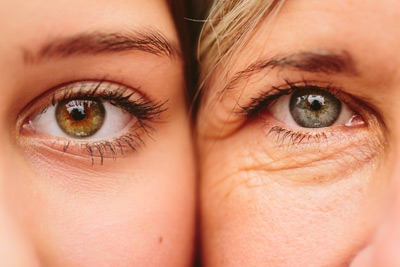 The team’s approach involved epigenetics, a field of science that studies heritable changes that can activate or deactivate genes without any change in the underlying DNA sequence of these genes. The word epigenetics is of Greek origin and literally means over and above (epi) the genome.

Their experiments refined a technique that won a Nobel prize in 2012. The basic idea is that by using a harmless virus to introduce just a few genes, called Yamanaka factors after the researcher who discovered them, scientists can reprogram the DNA of mature cells of different types to transform back into young (pluripotent) stem cells. These can then regenerate function lost to age, illness, or injury. The virus’ payload is turned on or off via injection of a selective inducer molecule.

This cell reprogramming method could lead to future disease therapies, but previous studies showed it is tough to safely rein in the rapid cell growth and tumor development triggered by Yamanaka factors. The Harvard team found a way to keep the beneficial effects and weed out the dangerous ones by leaving out one of the four factor genes, called MYC, that is closely related to cancer and can shorten the lifespan of mice when it is expressed.

First working in lab cell cultures, the team was able to rejuvenate damage to retinal ganglion cells, a type of neuron found at the rear of the eye. Later in a mouse model, the same techniques seemed to protect some optic nerve cells from damage and caused others to grow fresh connections to the brain. A third experiment had similar success reversing some vision damage in a mouse model of glaucoma, a leading cause of age-related blindness in humans.

In lab tests, the glaucoma model mice who received the injection treatment gained back roughly half of their previously lost visual ability. In other experiments, middle-aged mice who received the injection scored similar to younger mice in visual tests, plus their DNA showed expression and methylation (epigenetic patterns of common chemical groups that attach to DNA at different life stages) signatures that resembled the genetic material of younger mice. They have also found that these recovered functions require two DNA methylation enzymes that could be responsible for these epigenetic changes during the reprograming.

While the researchers are encouraged by this progress, they caution that epigenetic reprogramming techniques are still very complex and still harbor risk of abnormal cell growth or cancer. They plan to conduct many further studies to test the gene therapy technologies in larger animals, explore how the restorative factors impact other types of cells and tissues, and verify that the youthful changes seen are not fleeting.