In May 2020, the U.S. Food and Drug Administration approved flortaucipir, also called AV-1451, as the first drug used to image the presence of tau tangles, one of the hallmarks of Alzheimer’s disease. According to the key study supported in part by NIA, flortaucipir can be used with positron emission tomography (PET) imaging to help doctors diagnose late-stage Alzheimer’s. As published in JAMA Neurology, these findings provide evidence that flortaucipir PET scans may be used safely in older adults and that a clinician’s visual reading of the brain scans identifies the presence of tau tangles with a high level of accuracy. 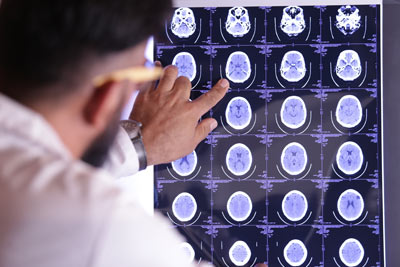 In Alzheimer’s disease, abnormal deposits of proteins form amyloid plaques and tau tangles throughout the brain leading to memory loss and other cognitive impairment. Currently, an Alzheimer’s diagnosis can only be confirmed with certainty after death, by examining brain tissue in an autopsy. Flortaucipir, a radioactive probe that binds to the fibrillar tau in multiple areas in the brain can be used as a biomarker by imaging by PET scanning. Using flortaucipir early in the diagnosis phase may help doctors confirm the presence of tau tangles in a patient’s brain to confirm an Alzheimer’s diagnosis and inform treatment.

For the NIA-supported biomarker study, researchers at Avid Radiopharmaceuticals in Philadelphia set out to compare the results of a flortaucipir PET scan in older adults and an autopsy examination of the brain tissue after death. To accomplish this, they identified 156 older adults who were terminally ill, ranged in cognitive ability from normal to mild cognitive impairment or dementia, and agreed to participate in a brain donation program. Each participant received a flortaucipir PET scan. The brain scan was found to be generally safe with relatively few negative side effects.

In 64 of the participants who died during the study, brain scan readings were compared with the autopsy readings done by medical examiners who reviewed the same brains. The study showed a high degree of similarity between the readers’ diagnoses of Alzheimer’s disease using the brain scans compared with the autopsies. These results were confirmed in a second study with a different group of readers who also reviewed an additional set of 18 flortaucipir scans and autopsy results.

Although the amount and patterns of the tau tangles found indicated varying levels of early and later stages of disease, the flortaucipir brain scans corresponding to the tau tangle patterns found in late-stage Alzheimer’s disease were the most accurate. Importantly, the brains showing a tau tangle pattern for Alzheimer’s also had amyloid plaques when autopsied. Because the combination of both tau tangles and amyloid plaques is considered a confirmation of the pathological diagnosis of Alzheimer’s disease, these findings support the use of the flortaucipir PET scan as an effective tool to help diagnose late-stage Alzheimer’s with greater certainty.

There were limitations to this study: Overall, the study group lacked racial and ethnic diversity and had a high percentage of participants with advanced levels of dementia. Additional studies are needed to better represent the general population and to test the effectiveness of the flortaucipir PET scan with people in earlier stages of dementia.