As dementia worsens, people may gradually lose the ability to prepare meals, bathe, get dressed, and otherwise care for themselves. The likelihood that people living with dementia rely on unpaid care rather than paid care depends on whether a spouse or adult children are available to be primary caregivers, according to an NIA-supported study at the University of Michigan. Conversely, people without family members available to care for them are more likely to require paid help from a long-term care facility. As reported recently in Health Affairs, national estimates suggest that available family members and other unpaid caregivers are an important consideration for how people with dementia can remain outside of a nursing home environment when they need help with everyday activities. 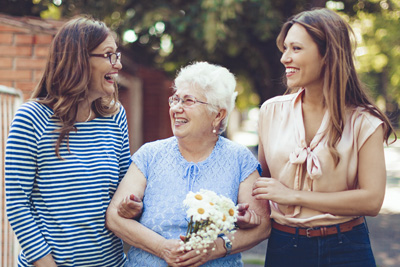 To assess how family member availability influences whether older adults with dementia receive unpaid care at home, the research team analyzed a sample from the Health and Retirement Study, a 30-year NIA-supported project also based at the University of Michigan. The investigators are studying the health of 26,000 Americans as they grow older.

Of nearly 5,000 participants aged 55 and older who were diagnosed with dementia, about 2,900 reported limitations with activities of daily life, like dressing and bathing, but did not live at a nursing facility. Because the older adults with dementia needed help with everyday activities, the team measured the hours per month from sources of paid care, such as from a paid nonfamily caregiver or nursing home employee, and unpaid care, such as from a spouse or adult child.

Taken together, these findings suggest that not having an adult child may be an important predictor of whether an adult with dementia will need to transition to paid care. The national estimates of the availability of family caregivers may help experts predict on a large scale whether people with dementia may need paid care, and the estimates could aid policymakers who wish to develop a national caregiving system that includes both paid and unpaid care for people with dementia. Future studies may be able to explore how different types of caregivers, both paid and unpaid, are involved as an adult with worsening dementia requires more intensive daily care.

These activities relate to NIH’s AD+ADRD Research Implementation Milestones 13.D: Support secondary analysis of data from population-based and intervention studies with appropriate content related to informal and formal caregiving; 13.B: Launch research programs to develop and validate assessments of the psychological, financial, and physical health impact of caregiving; and 13.J: Expand research on the care workforce and supply of skilled labor.