Exercise and physical activity are important as you age. They help keep your body and brain healthy. Staying active can help you remain independent by preventing loss of physical mobility. It may also slow age-related cognitive decline.

Researchers don’t know how exercise might slow age-related cognitive decline. A better understanding of this process could point toward ways to help those who have difficulty exercising due to fragility or health conditions. 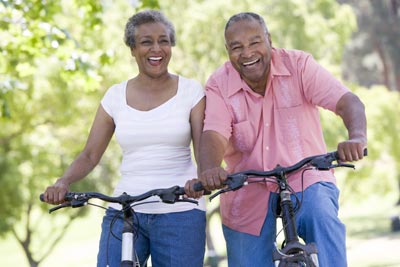 In animals, exercise has been shown to reverse age-related decline in a brain area called the hippocampus. This region is important for learning, memory, and other cognitive functions. To determine what may underlie these potential rejuvenating effects of exercise on the brain, a research team led by Dr. Saul A. Villeda at the University of California, San Francisco compared proteins that circulate in the blood of mice who get a lot of physical activity with those in sedentary mice. The work was funded by NIH’s National Institute on Aging (NIA). Results were published on June 10, 2020 in Science.

Researchers compared the brains of young (3 months) and aged (18 months) mice that either had access to a running wheel in their cage for six weeks or were sedentary. They looked at age-related molecular and cellular changes in the hippocampus. Older mice that were active showed increased generation of new brain cells called neurons and higher levels of nerve cell growth factors than sedentary mice. They also made less errors in hippocampal-dependent learning and memory tasks.

The team then collected blood and plasma from both young (6 to 7 months) and aged mice (18 months) who were either active or sedentary. They injected their plasma into separate groups of older mice eight times over three weeks. The aged mice that received blood from the active groups showed increases in new neurons and on learning and memory tasks similar to those of the active mice themselves.

Many proteins were found at higher levels in the blood of the active mice. The researchers honed in on one made in the liver, called GPLD1. Researchers injected the gene for the protein into aged mice, causing their livers to produce GPLD1. After three weeks, the animals showed brain cell growth and improvements in learning and memory similar to that seen in active mice.

GPLD1 did not appear to enter the brain, suggesting that the protein acts through one or more molecules that interact with the brain directly. Further study will be needed to understand its mechanism of action.

“Through this protein, the liver is responding to physical activity and telling the old brain to get young,” Villeda says. “This is a remarkable example of liver-to-brain communication that, to the best of our knowledge, no one knew existed.”

More research is needed to determine how much, how long, and what types of exercise people would need to see cognitive benefits. Further, identifying the factors underlying this protein’s effects on the brain could help researchers develop therapeutics to combat age-related cognitive decline.