Epigenetics is the study of chemical features that attach to genes and affect their activity. Mammals share similar life stages, yet little was known about whether specific epigenetic changes linked to these life stages look the same for different animals. A new study, in part supported by NIA, used epigenetics to compare aging of dogs and humans. Such epigenetic changes may help researchers better understand human aging processes. Findings updated the previous “one dog year equal to seven human years” formula and were recently published in Cell Systems. 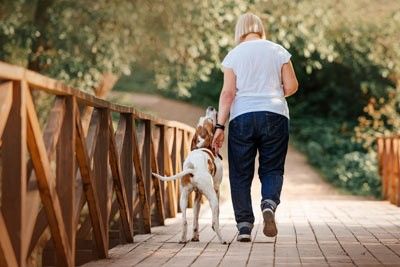 Researchers from the University of California (UC), San Diego, National Human Genome Research Institute (part of the National Institutes of Health), Sanford Burnham Prebys Medical Discovery Institute in San Diego, University of Pittsburgh School of Medicine, and UC Davis looked at DNA methylation — a common type of epigenetic change where methyl groups (small molecules) attach to and turn off or silence a particular gene. Methylation patterns change over time in a consistent way across humans, which some believe can be used as an epigenetic clock to predict age. To help understand whether the epigenetic clocks in other animals differ from humans, the researchers studied the lifespan methylation of both dogs and humans. Domesticated, or pet, dogs are animals similar in their environment, level of health care, and aging patterns to humans, providing a good model for comparison.

By comparing DNA methylation patterns, this study demonstrates the use of epigenetics to translate age and aging between species. Such translation may be a helpful tool for understanding aging and studying healthy aging interventions. Next steps include testing the formula with other dog breeds, and further exploring epigenetic changes in developmental genes as they relate to aging.

This research was supported in part by NIA grant P01AG031862.