Scientists who study aging have long tracked older adults’ declines in cognitive abilities and walking speed as separate indicators of potential risk for developing dementias such as Alzheimer’s disease. But a recent study led by NIA Intramural Research Program (IRP) scientists showed that a combined decline in memory and walking speed were a bright, flashing warning light of increased risk for dementia. 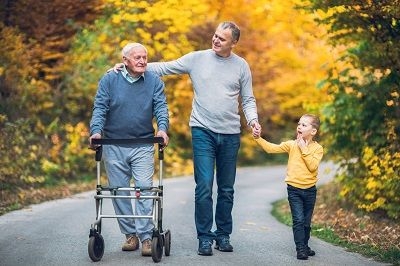 The international research team analyzed data from 8,699 participants 60 years old or older in multiple long-term studies of aging — including the NIA IRP’s Baltimore Longitudinal Study of Aging and studies based in the U.S., Italy, Iceland and Sweden — conducted between 1997 and 2018. The results were published Feb. 5 in JAMA Network Open.

By itself, decline in walking speed, or gait speed, more than doubled the risk for developing dementia, while memory decline alone tripled it. But people who showed parallel declines in gait speed and memory had an overall six times higher risk of dementia than those with no drop-offs in memory recall or walking speed test performance.

The authors noted some limitations of their analysis, including that memory measures and dementia diagnosis procedures varied across studies. Another was the potential for some data to be skewed due to some participants having had higher-than-average baseline measurements, thus showing a more dramatic decline than those with lower baseline scores.

Overall, the researchers noted, findings support the routine use of gait speed and verbal memory recall tests by clinicians to identify older adults at high risk for dementia. Doctors could then give further attention to address other dementia risk factors, such as high blood pressure. Future work in this realm could examine if these dual decliners could be a target group for preventive or therapeutic interventions. The team plans further investigations to better understand the mechanisms behind what makes people who experience dual decline more likely to progress to dementia.

These activities relate to NIA's AD+ADRD Research Implementation Milestone 1.D. “Develop state-of-the-art protocol for assessing dementia on large nationally representative samples that (a) includes racial/ethnic subsamples large enough to support disparities research and (b) is adaptable for use in comparable studies around the world”