Back pain is a leading cause of long-term disability. It often results from the degeneration of discs between vertebrae in the spine. These cushion the spine, maintain flexibility, and help absorb the pressure of movement. But the discs degenerate with age, and chronic back pain is common among older adults. There are currently no treatments to stop disc degeneration. 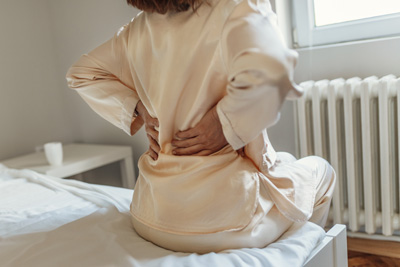 A research team led by Dr. Makarand Risbud of Thomas Jefferson University tested whether treatment with the drugs dasatinib and quercetin would prevent disc degeneration in mice. Both drugs are senolytics, which selectively remove aged cells known as senescent cells.

Senescent cells permanently stop dividing but do not die. They remain active and can release signals that trigger inflammation, along with enzymes that damage healthy cells nearby. Senescent cells accumulate with age and are thought to play a role in many age-related diseases. Past studies have found increased levels of senescent cells during disc aging and degeneration. The research team theorized that eliminating these cells might slow damage to spinal discs.

The researchers injected mice with a combination of dasatinib and quercetin each week. They began the treatments in young, middle-age, and older mice (6, 14, and 18 months of age) to examine when it might have the most benefit. Treatment continued until 23 months of age, when advanced disc degeneration would be expected.

They found that mice started on the treatment at 6 or 14 months of age had less damage to disc tissue than those given an inactive placebo. They also found fewer senescent cells and lower levels of their tissue-degrading enzymes and inflammatory proteins.

No significant improvements were found in the mice that started treatment at 18 months of age. This was unexpected, as the scientists thought that older mice, who had accumulated more senescent cells, might benefit the most.

Long-term use of the treatment appeared to be well-tolerated. These results suggest that the combination of dasatinib and quercetin may be useful for treating age-related disc degeneration. The treatment has shown promise for treating other conditions like lung fibrosis, which is caused by scarring of the lung tissue, and has been tested in recent clinical trials.

“Our findings show that if given early, senolytic drugs can actually slow disc degeneration,” Risbud says. “This research paves the way for translating these studies first to a preclinical animal model and then to a clinical trial in humans.”

Senolytic therapy may represent a new approach for preventing a common cause of back pain for which there are few available options. However, more study is needed before it could be tested for treating disc degeneration in people.