Drug candidates that lower tumor necrosis factor alpha (TNF-α), an immune system protein that leads to brain inflammation, protected lab mice from cognitive decline, a new study shows. One of the drug candidates tested was designed by NIA intramural scientists, who led an international team of researchers for the new study. The findings, which were published March 2 in Alzheimer’s & Dementia, provide evidence that brain inflammation is a key neuropathological pathway of interest in the cognitive loss associated with Alzheimer’s disease. 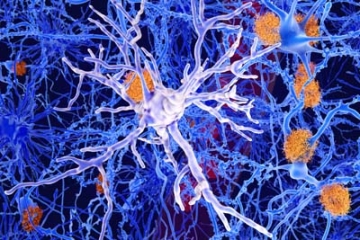 Inflammation is essential to the healing process. For example, in the very early stage of Alzheimer’s, as harmful beta-amyloid plaques begin to form in the brain, immune cells such as microglia help to remove cellular debris and toxins while supporting the survival of neurons. However, when inflammation levels in the brain are high and continue for too long, microglia become activated. Along with other immune cells, microglia release toxic proteins, such as TNF-α, that injure neurons. TNF-α is important for the start and progression of inflammation in the brains of people with Alzheimer’s.

For this study, the team set out to investigate whether prolonged inflammation in the brain could directly cause cognitive symptoms in Alzheimer’s. To do this, they tested two drug candidates that can reduce inflammation in the brain by lowering TNF-α levels. One drug was pomalidomide (Pom), which is FDA-approved to treat a certain type of cancer called multiple myeloma, and the other was an NIA-designed drug candidate, 3,6’-dithiopomalidomide (3,6’-DP), which has the same anti-inflammatory effects as Pom, but is less toxic.

For four months, the team gave the drug candidates to groups of mice that genetically showed molecular and behavioral changes that were similar to changes seen in people with Alzheimer’s. They found that lowering levels of TNF-α in the brains of mice could lessen excessive inflammation and, thereby, improve memory and thinking ability and cellular changes associated with Alzheimer’s.

Both drug candidates reduced levels of activated microglia and molecules linked to brain inflammation. Also, mice treated with 3,6’-DP showed improvement in behavioral laboratory tasks that test spatial and working memory as well as anxiety behaviors and motor function. In addition to improved cognition in treated mice, the researchers found, nerve cells of these mice had more connections in areas of the brain that are crucial for memory and attention.

Notably, reducing inflammation by lowering TNF-α did not have any effect on brain beta-amyloid levels. These results suggest that, once instigated, brain inflammation is a key intermediate step in the neuropathological pathway leading to neuron and cognitive loss in Alzheimer’s.

The study provides evidence that brain inflammation — which occurs decades before dementia symptoms are noticeable — is an important disease pathway to pursue in finding treatments for Alzheimer’s. The authors point out, however, that targeting neuroinflammation as a treatment for Alzheimer’s is a balancing act. Any potential treatment must preserve the early protective effects of inflammation while also preventing the harmful cellular changes that occur the longer inflammation continues. As a next step, the researchers are planning to study inflammation as a potential Alzheimer’s drug target and are expanding exploration of 3,6’-DP as a drug candidate for other degenerative conditions, including traumatic brain injury and stroke.

This research was supported in part by the Intramural Research Program at NIA (ZIAAG000994) as well as NIA grant R56AG057028.