Diet is known to influence heart health. Experts recommend a diet low in sodium and saturated fat to reduce the risk of heart disease. A heart-healthy diet also includes plenty of vegetables, fruits, and whole grains. Research shows that the Mediterranean diet—full of fruits, vegetables, fish, cereals, and legumes, with little meat and dairy—may reduce the risk of heart disease. 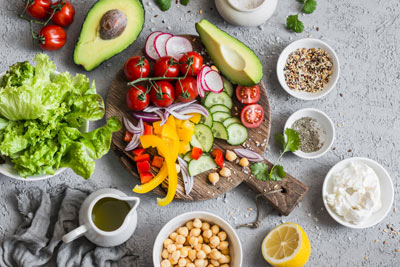 A team led by Dr. James M. Shikany of the University of Alabama at Birmingham examined whether dietary patterns are associated with the risk of sudden cardiac death. The study was funded by NIH’s National Institute of Neurological Disorders and Stroke (NINDS), National Institute on Aging (NIA), and National Heart, Lung, and Blood Institute (NHLBI). Results were published in the Journal of the American Heart Association on July 6, 2021.

The researchers analyzed the diets of more than 21,000 participants using a food questionnaire at the start of the study. Participants were asked how often and in what quantities they ate 110 foods in the past year. Both those with and without a history of coronary heart disease were included. Participants were part of the long-running REGARDS (REasons for Geographic and Racial Differences in Stroke) study.

Based on the questionnaire responses, researchers calculated a Mediterranean diet score. They also identified five dietary patterns. One, which they termed the “Southern” eating pattern, has large amounts of added fats, fried food, eggs, organ and processed meats, and sugar‐sweetened beverages. Other dietary patterns included a “sweets” pattern heavy on added sugar, a “convenience” pattern made mainly of ready-to-eat foods and take-out, a “plant-based” pattern,” and an “alcohol and salad” pattern.

The researchers assessed how closely participants adhered to each dietary pattern. For example, someone could adhere closely to the Mediterranean diet while also adhering to the “sweets” pattern, but to a lesser degree. They also recorded any heart-related events over an average of 10 years.

“While this study was observational in nature, the results suggest that diet may be a modifiable risk factor for sudden cardiac death,” Shikany says.

These results support other findings that improving your diet can have a significant effect on heart health.