People with Alzheimer’s disease and related dementias may start having trouble managing their finances several years before their diagnosis, according to new research supported by NIA. Published online in JAMA Internal Medicine, the study is the first large-scale analysis of people’s ability to manage their money before and after a dementia diagnosis. 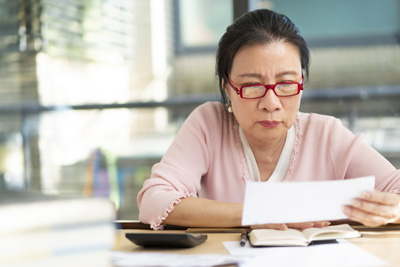 Common symptoms of dementia, including memory and cognitive limitations, can lead people with dementia to have trouble handling money and paying bills, so repeated financial mistakes can be an early sign of the disease. The new study, led by scientists at Johns Hopkins University, linked Medicare claims data to credit card payments and credit reports to examine dementia-related money problems. The researchers analyzed information from 1999 to 2018 on more than 81,000 Medicare beneficiaries, about a third of whom were diagnosed with dementia within this period. All study participants were at least 65 years old and lived alone. The researchers studied the number of missed credit card payments and credit scores for seven years before and four years after a dementia diagnosis and compared this information against data from people without dementia.

The researchers point out some limitations of the study: By using only Medicare claims data, the study might have missed some cases of dementia, and additional information from utility bills, rent payments, or medical collections might have helped to provide a clearer picture of money problems. Also, the findings might not apply to married couples or older adults in assisted living facilities, because those people might have help handling their finances.

The study’s results help show that the period during which an older adult might be at risk of financial mismanagement and scams may be longer than currently understood and point to the need for early diagnostic tools and policies to help protect older adults. The researchers also noted that improved support services and financial guidance could help people with dementia and their caregivers get the resources they need to maintain their financial security and independence.

This research was supported in part by NIA grant R21AG053698.

These activities relate to NIA’s AD+ADRD Research Implementation Milestone 9.M, “Develop diagnostics/biomarkers in asymptomatic individuals,” and 9.N, “Determining the value of screening for clinically relevant cognitive impairment in the absence of a cognitive complaint.”