Good news for tomato lovers: a naturally occurring compound found in green tomatoes could hold a key to healthier aging, according to a recent study conducted in animal models and human cells. The work is the result of an extensive collaboration among three laboratories of the National Institute on Aging’s Intramural Research Program: the Laboratory of Molecular Gerontology, the Laboratory of Genetics & Genomics, and the Laboratory of Neurosciences. 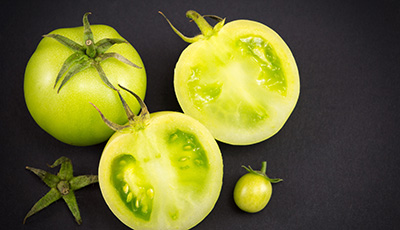 One area of focus was the effect of tomatidine in aged muscle cells. Sarcopenia, a decline of skeletal muscle tissue as we age, is a top cause of functional decline and loss of independence in older individuals. Sarcopenia is mainly caused by deterioration of the powerhouse of the cell, the mitochondria. By recycling slower-working mitochondria through a process called mitophagy, cells can improve efficiency. Tomatidine has been shown to improve muscle function in animal models through the maintenance of vigorous mitochondria in aged muscle cells.

The NIA team found that C. elegans that were given tomatidine in their food lived significantly longer and had improved physical health than those with standard diets. The compound lessened the decline in cellular function that comes with age in C. elegans. Metabolomics data in tomatidine-treated C. elegans showed an increase in production of key genes associated with mitochondrial maintenance and health.

Researchers think that tomatidine likely induces a mild oxidative stress, allowing cells to upregulate signals that can improve efficiency and strength. Production of one such cellular signal—transcription factor Nrf-2—is known to be stimulated by exercise and fasting, which have been shown to lessen the impact of aging in many animal models.

Though most of this work was discovered in C. elegans, NIA researchers also did preliminary human cell testing, where they have found that tomatidine modulated similar mechanisms in human cells. In future studies, they want to take a closer look at how tomatidine might spark improved human cellular health and potentially improve healthy aging. They will also continue examining how tomatidine might interact with other known anti-aging compounds.

This study provides basic evidence that a particular compound in tomatoes may be beneficial for aging. Scientists will continue their studies to see if the compound in some form, or adding such vegetables to a human diet, could someday be part of a healthy aging strategy More studies will need to be done, but the seeds for future work have already been planted.