Critically ill patients in intensive care units (ICUs) did not benefit from two antipsychotic drugs used to treat delirium, according to a large clinical trial funded by the National Institute on Aging, part of the National Institutes of Health. The multi-site team that conducted the trial found no evidence that treatment with antipsychotic medicines—haloperidol or ziprasidone—affected delirium, survival, length of ICU or hospital stay or safety. The findings from the Modifying the Impact of ICU-Associated Neurological Dysfunction-USA (MIND-USA) Study were published online Oct. 22, 2018 in The New England Journal of Medicine.

“This is strong evidence from what we consider a ‘gold standard’ clinical trial showing that these two antipsychotics don’t work to treat delirium during a critical illness,” said NIA Deputy Director Marie A. Bernard, M.D. “Antipsychotics have often been used to treat delirium. The evidence from this study suggests the need to reexamine that practice.” Bernard is also NIA’s senior geriatrician.

Delirium is an acute disturbance in attention and awareness with symptoms that can include disorganized thinking and agitation. More than 7 million hospitalized Americans per year experience delirium. It can affect patients of any age but is more common among older adults who experience major illness—especially involving an ICU stay—or have major surgery. Delirium is also associated with higher ICU costs and multiple adverse outcomes, such as longer hospital stays, long-term cognitive impairment and death.

Antipsychotic medications have been used to treat delirium in ICU patients for 40 years without definitive understanding of their effectiveness. To address the question of benefit versus risk of the use of antipsychotics for delirium, the MIND USA investigators, led by E. Wesley Ely, M.D., M.P.H., professor of medicine at Vanderbilt University Medical Center, Nashville, Tennessee, associate director of Research for the VA Geriatric Research Education Clinical Center, and co-director of the CIBS (Critical Illness, Brain dysfunction, and Survivorship) Center, screened nearly 21,000 patients at 16 U.S. medical centers. Of the 1,183 patients on mechanical ventilation or in shock enrolled, 566 became delirious and were randomized into three groups: those who received intravenous haloperidol, ziprasidone or placebo (saline). The researchers then measured for endpoints including delirium and coma duration, time on mechanical ventilation, successful discharge from ICU and hospital, as well as 30- and 90-day mortality.

Researchers found no significant difference in duration of delirium or coma among those participants on haloperidol or ziprasidone compared to placebo. Similarly, there were no significant differences among participants on either antipsychotic medication compared to placebo in 30-day and 90-day mortality or time on the ventilator, or in the ICU and hospital. 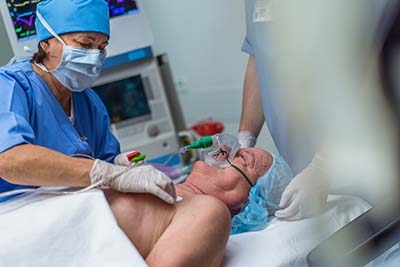 The study population included participants with a wide range of ages, conditions and admission diagnoses. Overall, they had a 73-percent 30-day survival rate and 64-percent 90-day survival rate, which reflects the severe nature of their illnesses. The research team also found no evidence of major harm from the antipsychotics but did note other research suggesting safety concerns—including increased mortality—associated with antipsychotic use in non-ICU geriatric populations.

“This research joins other important studies on delirium showing that there clearly is need for improvement in treating and managing this complicated condition,” said Molly Wagster, Ph.D. chief of the Behavioral and Systems Neuroscience Branch in the NIA’s Division of Neuroscience. “Large randomized trials like this can inform clinicians and help guide care.”

The MIND USA researchers noted there is some evidence that medications such as dexmedetomidine or melatonin—which are being studied in separate NIA-funded grants to other researchers (AG053582 and AG050850)—may reduce both the prevalence and duration of delirium. The authors emphasized that reducing oversedation and improving early mobility is another strategy.

About the National Institute on Aging (NIA): The NIA leads the federal government effort conducting and supporting research on aging and the health and well-being of older people. The Institute’s broad scientific program seeks to understand the nature of aging and to extend the healthy, active years of life. For more information on research, aging, and health, go to the NIA website.