New research has revealed that hemochromatosis—a genetic condition that causes more than a million Americans to absorb too much iron from their diets—is a much more serious cause of disease and disability than previously thought. The upside is that the condition is easy to detect and treat. 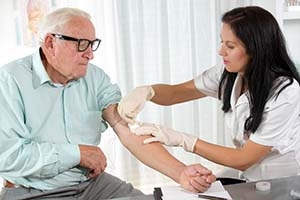 Two new studies, published in The BMJ and The Journals of Gerontology: Medical Sciences, showed that hemochromatosis, previously thought to be a low-level health risk, actually quadruples risk of liver disease and doubles the risk of arthritis and frailty in older people. It also causes higher risk of diabetes and chronic pain, and a small number of patients develop liver cancer. The research was led by a team from the University of Exeter in the United Kingdom, the University of Connecticut, and the NIA Intramural Research Program.

The disease is caused by two mutations in the gene known as HFE C282Y that codes for a protein regulating iron absorption. In a study about 10 times larger than any previous look at hemochromatosis rates, the team reviewed data on 2,890 British people who carried the two mutations. They found that one in five men and one in 10 women with these mutations developed additional diseases as they got older, compared to those without the genes. Hemochromatosis sufferers were also more likely to have chronic pain, lower muscle strength, and to be frail as they aged.

Hemochromatosis symptoms, such as fatigue and muscle and joint pains, are easily confused as part of typical aging, and the disease often goes undetected until damage is done. Known in Ireland as the Celtic Curse, the disease is common in Northern Europe. One in 300 U.S. non-Hispanic whites have two copies of the mutated gene, and about 10 percent are carriers. Women are less at risk for the condition until later in life, since they lose iron naturally through menstruation and childbearing.

The good news is that hemochromatosis can be detected through medical tests and treated by blood withdrawals. Researchers hope that this increased awareness of the scope of the problem can help lead to increased testing and treatment, which should improve quality of life and reduce frailty and disability rates for those with genetic risk for hemochromatosis.

Anyone with a family history of the condition should talk to their doctor and consider being tested for hereditary hemochromatosis if they are experiencing severe fatigue, unexplained cirrhosis, joint pain, arthritis, diabetes, heart problems, or erectile dysfunction.

This research was funded in part by the NIA Intramural Research Program.