Although it’s normal for brainpower to decline as people age, it’s not inevitable, studies show. Some people remain cognitively sharp into their 80s, 90s, and beyond, defying the common assumption that cognitive decline is a natural part of aging.

These lucky few, called cognitive super agers, perform demonstrably better on memory tests, such as remembering past events or recalling a list of words, compared with other adults their age. NIA-supported researchers are exploring the factors that set these people apart so the knowledge can be used to help others prevent or reverse age-related cognitive decline. 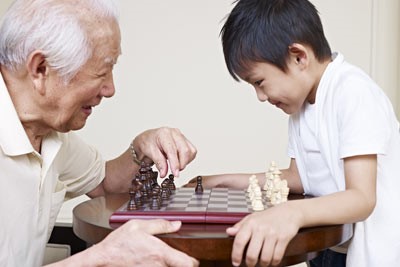 “There is a tendency to equate aging with a decline in mental function,” said Molly Wagster, Ph.D., chief of the Behavioral and Systems Neuroscience Branch in NIA’s Division of Neuroscience. “We want to study these cognitive super agers, who clearly break the expectation of cognitive decline, and unravel their secrets.”

How the Brain Changes with Age

“Atrophy is the strongest correlate of age,” said Claudia Kawas, M.D., of the University of California (UC), Irvine. She leads the longitudinal 90+ Study of more than 1,800 people age 90 years and older — the fastest growing sector of the U.S. population.

According to Kawas, a 90-year-old brain typically weighs 1,100 to 1,200 grams, and this is 100 or more grams less than the typical 40-year-old brain. Brain shrinkage mostly affects the prefrontal cortex and hippocampus, and the cerebral cortex, which is important for complex thought processes. Over time, the brain can also be affected by declining levels of neurotransmitters, changing hormones, deteriorating blood vessels, and impaired circulation of blood glucose. These brain changes can affect thinking, making it harder to recall words and names, focus on tasks, and process new information.

Physically, the brains of cognitive super agers seem to defy wear and tear better than the average brain. Researchers at Northwestern University’s Mesulam Center for Cognitive Neurology and Alzheimer’s Disease in Chicago have tentatively identified a “brain signature” for cognitive super agers, which they define as people age 80 years and older who have performance on memory tests comparable to people two to three decades younger. The researchers conducted magnetic resonance imaging (MRI) scans on 12 cognitive super agers, 10 cognitively normal peers, and 14 cognitively normal people in the 50- to 65-year age range. Comparisons revealed that the cingulate cortex, a brain region considered important for the integration of information related to memory, attention, cognitive control, and motivation was thicker in super agers than in their same-age peers and showed no atrophy compared with the same brain region of the middle agers. In fact, a specific region of the anterior cingulate cortex was significantly thicker in the brains of cognitive super agers than in middle agers’ brains. 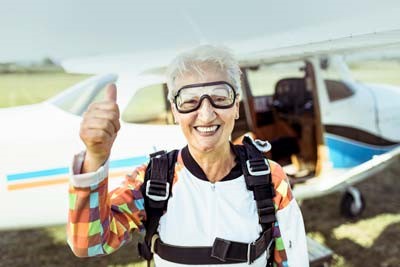 In a separate study, the Northwestern researchers found that super agers’ brains contained a much higher density of a particular type of cell called von Economo neurons, which are linked to social intelligence and awareness. Their brains had more of these neurons even than the brains of younger adults.

In a third investigation, the Northwestern researchers used MRI to measure brain volume over an 18-month period in a small group of study participants age 80 and older. They measured a 2.24% average annual volume loss in the cognitively normal adults versus a 1.06% loss in the super agers. In short, the super agers’ brains shrank at a significantly slower rate.

At Massachusetts General Hospital, Boston, researchers are studying younger super agers — people between age 60 and 80 who have memory recall abilities similar to those of 18- to 32-year-olds. They’ve identified distinctive thicknesses in two neural networks that connect parts of the brain important to memory function. The thickness is nearly the same as in the brains of younger adults. The researchers also found that super agers have a bigger hippocampus than other adults their age.

Researchers with UC Irvine’s 90+ Study have identified a curious and counterintuitive feature of the super ager brain: sometimes it shows the pathologies that characterize Alzheimer’s disease and related dementias.

Why Some People Retain Strong Brains into Old Age

Researchers are exploring several theories to explain why some people’s cognitive abilities stay intact to the end of life. Perhaps they start out in life with larger, stronger brains. Or perhaps their brains somehow change to compensate for aging’s damaging effects. Another theory being pursued is whether their brains have stronger defenses against the assaults of aging.

A person’s environment may be a factor. Human and animal studies by NIA-supported scientists have contributed to the growing body of evidence that enriching experiences, such as advanced education and mind-challenging occupations, can help brains last longer.

“Various exposures throughout the lifetime might help people maintain their brains better or maintain their cognition in the face of age- or disease-related brain changes,” explained Yaakov Stern, Ph.D., of the Taub Institute for Research on Alzheimer’s Disease and the Aging Brain at Columbia University Medical College, New York.

Other research focuses on genetic explanations. In an ongoing study of the Longevity Genes Project at Albert Einstein College of Medicine, New York, investigators are comparing the genetic profiles of children of healthy centenarians with the genetic profiles of the children of parents who did not live as long. They are looking for genes that might support strong neural networks and offer protection against mental and physical decline.

Social factors also could play a role in healthy cognitive aging. In one of Northwestern University’s studies, investigators gave a 42-item questionnaire on psychological well-being to 31 cognitive super agers and 19 cognitively normal peers. The cognitive super agers reported more friends and family connections, a finding that builds on past research showing links between psychological well-being and lower risk of Alzheimer’s.

Researchers are grappling to explain why some people’s brains resist physical decline and why other people’s brains show physical signs of age- and disease-related deterioration yet continue to function well. Two theories that are being explored revolve around the concepts of “cognitive reserve” and “brain maintenance.” Cognitive reserve is the idea that some brains are strong enough to fend off the assaults of aging and disease. Brain maintenance is the idea that some brains have extra power to keep working well even in the face of aging and disease.

Yaakov Stern, Ph.D., of Columbia University, uses a computer analogy: Some people’s brains have good hardware that doesn’t break down as easily, while others have software that can write around problem areas in the hardware.

What specific changes in the brain and body provoke cognitive decline or, conversely, stave it off? A team of scientists in NIA’s Intramural Research Program, led by Peter Rapp, Ph.D., chief of the Neurocognitive Aging Section, is seeking an answer through a project called STARRRS, for Successful Trajectories of Aging: Reserve and Resilience in RatS.

Rats are useful for studying the effects of aging because they are short-lived, and their brains do not accumulate the hallmark plaque and tangle pathology of Alzheimer’s. The breed of rats used for STARRRS has natural variability; some maintain their cognitive function as they age, and some don’t. This makes them particularly useful for comparative studies.

Researchers are observing the behaviors of these rats over their lifetimes and using neuroimaging, tissue sampling (obtained through noninvasive means, so as not to interfere with behavior), and other methods to track what’s going on in the brain.

“This is a rare and wonderful opportunity to follow individual animals and relate any changes in cognitive performance to changes going on elsewhere in the body and in the brain,” said Wagster. “STARRS should give us insights into potential targets for prevention and intervention, as well as when it would be most appropriate to intervene.”

The Next Phase of Research on Brainpower and Aging

In April 2017, NIA coordinated the Cognitive Aging Summit III, which was supported by the McKnight Brain Research Foundation (MBRF) through a generous grant to the Foundation for NIH (FNIH). The summit brought together a multidisciplinary group of investigators with shared interest in research on age-related cognitive decline and cognitive reserve and resilience, as compared to cognitive impairment or dementia. Participants identified opportunities for expanding our knowledge in this area, as well as gaps in our knowledge. One of the opportunities highlighted resulted in the STARRRS initiative. 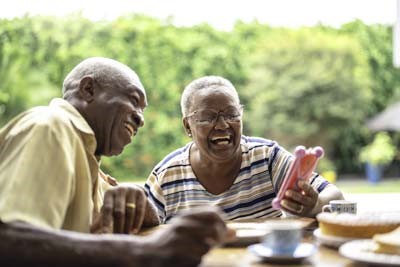 Another new initiative that stemmed from the summit and that also is underway — Collaboratory on Research Definitions for Cognitive Reserve and Resilience — brings together investigators from around the globe to develop a consensus on uniform definitions for terms such as “cognitive reserve,” “brain maintenance,” “resilience,” and “compensation” so that the research community will have a common language and understanding for reporting of results. Use of uniform definitions offers many benefits, including the pooling of data across studies to allow for adequately powered analyses and better interpretation of data.

“It’s one thing to say, ‘life exposures might increase reserve,’” says Stern, who serves as the primary investigator for the collaboratory charged with the definitions task. “It’s another thing to say, ‘we propose that the types of occupation people have can allow them to cope better with amyloid pathology.’ We can measure amyloid, we can measure cognition, and we can show how life exposure actually moderates between the two. In other words, we can turn a concept into a very concrete recipe for analysis.”

In February 2020, NIA issued an additional funding opportunity that stemmed from the Cognitive Aging Summit for support of research to understand factors that promote sustained cognitive health in older age: RFA-AG-21-015, Network for Identification, Evaluation, and Tracking of Older Persons with Superior Cognitive Performance for Their Chronological Age. Although chronological age itself remains the strongest predictor of age-related cognitive decline and many forms of dementia, including Alzheimer’s, it has become clear there are protective factors against these outcomes that are poorly understood. Awarded grants will support aggregation of sufficient numbers of these cognitive super agers to advance the field’s understanding of factors that promote sustained cognitive health and those that are not of primary importance. Working in part with funds contributed by MBRF in conjunction with FNIH, NIA invites applications to identify, evaluate, and track individuals with superior cognitive performance for their advanced age across multiple sites. The deadline for submission of applications is October 1, 2020.

Further research on cognitive super agers could lead to strategies that everyone can use — in younger years, in midlife, and in older age — to maintain thinking and memory skills. Just as important, it could also provide insights into how dementias such as Alzheimer’s might be prevented or reversed and provide critically important information for the identification of targets for interventions. And by identifying the factors that affect brain health, this research might one day be used to reduce disparities in brain-enriching opportunities so that everyone has a chance to keep their brain at maximum power throughout life.