Clearing senescent cells from the brain in mice preserves cognition

Out-of-commission cells that clutter the brain may accelerate dementia, according to researchers who found that getting rid of such cells preserved cognitive function in mice. The NIA-funded research suggests that senescent cells—cells that are alive but no longer divide or perform their designated functions— in the brain play a role in the neurodegeneration associated with Alzheimer’s disease and other types of dementia. Eliminating these cells before they cause damage to neurons appears to preserve cognition. These results were reported in a letter published Sept. 19 in Nature.

The study, led by Dr. Darren Baker of the Mayo Clinic, Rochester, MN, was conducted in mice bred to have the protein tau accumulate in the brain. In Alzheimer’s disease, tau turns into abnormal tangles that form inside neurons, disrupting normal communication among brain cells and contributing to cell death. 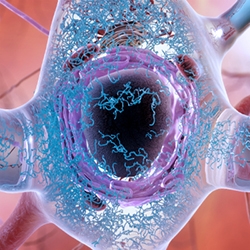 Researchers described a looping process of brain damage in which tau-producing neurons push glial cells (another type of brain cell) into senescence. The senescent glial cells in turn damage healthy neurons around them, and the damaged neurons produce toxic tau tangles.

The researchers found two methods to interrupt this sequence of events so that mice retained better short-term memory. In one method, they used a genetic tool to trigger expression of an enzyme that causes the glial cells to die as soon as they became senescent. In the mice that received this intervention, tau tangles did not build up as rapidly as in mice that did not receive the intervention.

In the second method, the researchers treated the mice with an anticancer drug, navitoclax, that can induce cell death and eliminate senescent cells. This, too, had protective effects against the accumulation of tau and short-term memory loss.

Future research questions include whether these findings apply to other mouse models of Alzheimer’s or to humans, and whether treatments to destroy or inhibit senescent cells can reverse cognitive damage that has already occurred.