Older adults are all too often easy targets for financial abuse, and those with Alzheimer’s disease and other cognitive disorders are especially vulnerable. To learn more about seniors’ financial skills, NIA-funded scientists are using brain scans to explore the regions and connectivity in the brain associated with the ability to manage money. 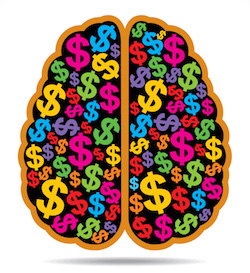 Recent studies used magnetic resonance imaging (MRI) to identify brain areas that might be associated with a reduced ability to handle financial affairs. The findings offer researchers new insights into changes in the aging brain that may be tied to faulty—and even risky—financial decisions.

“It’s the $18.1 trillion problem,” said Daniel Marson, J.D., Ph.D., professor of neurology at the University of Alabama at Birmingham, citing an estimate of household wealth (PDF, 6.8M) held by U.S. adults age 65 and older. “That money is at risk in part because of the cognitive disorders of aging.

Older adults lose at least $2.9 billion per year to scams, fraud, theft, and other misdeeds, according to a 2011 MetLife study (PDF, 855K). A 2016 survey by Investor Protection Trust (PDF, 382K), a nonprofit devoted to investor education, shows that 17 percent of people age 65 or older have been taken advantage of financially.

To better understand how age- and Alzheimer’s-related changes in brain structure and function may influence behavior, learning, and decision making, including financial decisions, NIA-supported scientists are using brain imaging.

“Novel neuroimaging studies, along with studies involving cognitive measures, are providing intriguing data on why older adults—even those who were previously quite savvy about finances—may lose their money-managing abilities,” said Nina Silverberg, Ph.D., program director of the Alzheimer’s Disease Centers at NIA’s Division of Neuroscience.

She added, “These new insights add to our growing understanding of the basic biological changes involved in dementia onset and progression and inform our efforts to find effective interventions. These types of studies also help us learn more about the general cognitive changes associated with aging.”

Financial capacity is necessary for living independently. It encompasses relatively simple tasks, such as counting change and paying bills, and more complex activities, such as balancing a checkbook and making investment decisions. These tasks require cognitive functions that include math skills, memory, attention, executive function, and judgment.

Not surprisingly, people with Alzheimer’s disease and related dementias have poor financial capacity and may not be able to manage money on their own. In fact, trouble managing money is often an early sign of the disease. Like other functional skills, financial capacity is not lost all at once, but declines gradually as Alzheimer’s progresses and cognition—the ability to think, learn, and remember—erodes.

Scientists in recent years have studied older adults without dementia to identify and measure the brain’s role in various aspects of financial ability—and possibly to predict who may be on the path to reduced capacity. Results suggest that even cognitively normal older adults may be at risk for poor financial decision-making in some circumstances.

Researchers commonly use laboratory tasks, such as those that assess reward processing and risk taking, or neuropsychological measures such as the Financial Capacity Instrument (FCI) to assess decision-making abilities in older adults. The FCI tests abilities such as reading a bank statement, paying bills, and using financial judgment. Now researchers are using structural MRIs to look for brain areas that may be involved in diminished financial capacity, how these develop over time, and how they differ in older adults across the cognitive spectrum.

“Imaging is increasing the depth of our scientific understanding of the brain,” Dr. Marson said. “MRI helps us understand how changes in brain structure and connectivity drive downstream functional changes” in everyday life. For example, when a person has trouble reading a bank statement, an MRI may reveal aspects of brain structure associated with that specific trouble.

“Just as neuroimaging is used as a biomarker for early Alzheimer’s disease, one could imagine researchers using MRIs to develop biomarkers for impaired financial decision making,” said Duke Han, Ph.D., an associate professor of family medicine, neurology, and psychology at the University of Southern California, Los Angeles. “Ideally, scientists could find ways to strengthen the brain to keep seniors functioning better so they are less likely to become victims of financial abuse.” 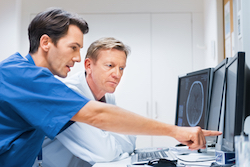 Researchers have used different types of MRI to see if brain structure, function, and connectivity relate to financial capacity. So far, no one brain region or activity stands out.

In one early study, Dr. Marson and colleagues found that older adults with mild cognitive impairment (MCI) performed worse than controls on cognitive tests and the FCI. Their performance was moderately associated with the volume of the angular gyrus, a brain structure involved in number processing, calculation, and other processes. Volume changes in the angular gyrus may predict financial-skill deficits in people with memory-related MCI, they concluded (Griffith et al., 2010).

In a follow-up study, Dr. Marson and his team found that reduced volume of the medial frontal cortex, a region of the brain involved in attention and cognitively demanding tasks, was associated with diminished FCI performance in people with mild Alzheimer's disease (Stoeckel et al., 2013).

Building on these studies, a team at Rush University  Medical Center, Chicago, found that greater financial literacy—conceptual knowledge and numeracy abilities that may support financial capacity—was associated with greater functional connectivity between the posterior cingulate cortex and three other brain regions in older adults without dementia (Han et al., 2014). They used resting-state functional MRI, which shows functional connectivity between brain regions. The researchers could not discern whether better financial literacy strengthened these brain connections, or whether subjects with strong brain connections were somehow more financially literate than those with weaker connections.

In other research, the same team found that seniors without dementia who were susceptible to financial scams—as determined by a short questionnaire, not actual scams—had lower total gray-matter volume and less gray matter in the frontal and temporal lobes (Han et al., 2016). “Further research is needed to determine whether gray-matter reductions in these regions may be a biomarker for susceptibility to scams in old age,” the authors wrote.

Use of neuroimaging to better understand brain changes related to decline in financial capacity is a promising area of research. It is too soon to know whether and how such measures may be applied in a clinical setting, but researchers are eager to explore their potential.

“Can we develop a neuroscience of financial capacity? What are the brain regions and networks that support different kinds of financial skills?” asked Dr. Marson.