Physical frailty is associated with abnormal structures in white matter of the brain, according to a study funded in part by NIA. The research, led by an NIA scientist and published in the Journal of Gerontology, Series A: Biological Sciences and Medical Sciences, suggests that these abnormal structures may be an important biomarker for future frailty risk. 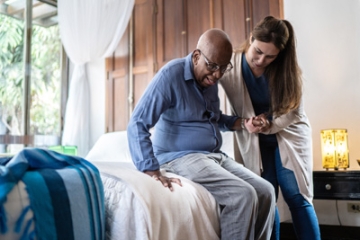 Frailty is common in older adults and is characterized by susceptibility to poor health, a loss of physical or psychological function, and an elevated risk of disease and death. Physical frailty is associated with an increased risk of developing dementia and other neurologic disorders, but few studies have examined the neurobiological changes that underlie frailty and frailty risk. The research team studied the association of cerebral white matter structure with current and future frailty.

Using brain MRI data from 1,754 participants in the ARIC Neurocognitive Study, the researchers found that frail individuals had more abnormal white matter structures in their brains, known as white matter hyperintensities (WMH), than non-frail participants. WMH are brain lesions that indicate injury or disease and show up as bright areas during MRI scans.

Non-frail participants with a high volume of WMH had an increased risk of developing frailty during a seven-year follow-up period, suggesting that WMH may be an important biomarker for future frailty risk. The findings held true for Black and white participants, men and women, and those without a history of dementia or stroke. Though frailty is unlikely to cause these brain changes, it is possible that structural damage to cerebral white matter promotes the development of frailty.

The research suggests physical frailty may serve as a clinical indicator of cerebral small vessel disease and perhaps a sign that a person has an increased risk for future dementia or cognitive deterioration. The team noted that implementing a frailty assessment in a health care setting may help identify individuals at risk for cognitive and functional decline. Additionally, they acknowledged that other biomarkers of brain health, such as brain volume, may also relate to frailty risk.

Further studies are needed to determine whether neurological factors play a causal role in frailty development.