Finding early-stage biological markers of Alzheimer’s disease to predict who will and won’t progress to dementia is an evolving area of research. A blood test for the protein neurofilament light chain (NfL) predicted disease progression and brain neurodegeneration in cognitively normal individuals at risk for familial Alzheimer’s disease (FAD), a rare, early-onset form, a recent study shows. It is unknown if NfL in blood might help predict onset of the more common, late-onset form of Alzheimer’s dementia, as well as other neurodegenerative diseases. 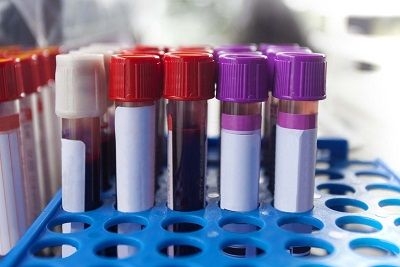 Specialized brain scans and lumbar punctures are used to measure certain changes in the brain and cerebrospinal fluid that occur years before dementia symptoms begin. But these procedures are relatively invasive and expensive, leading researchers to pursue other methods such as blood tests. To date, the few experimental blood tests most often measure the amyloid protein. In a study published Jan. 21 in Nature Medicine, researchers led by the German Center for Neurodegenerative Diseases examined a different protein, NfL, as a potential blood biomarker.

The researchers analyzed data from 405 participants in the Dominantly Inherited Alzheimer Network (DIAN), an NIA-supported, global study of families affected by genetic mutations that cause FAD. Participants included 243 people with a genetic mutation and 162 without it. For a given mutation, symptoms tend to start at about the same age, allowing researchers to calculate the estimated years to symptom onset. Following the participants over a median of 3 years, the researchers found that in mutation carriers, NfL levels in blood began to rise up to 16 years before the estimated age of onset of Alzheimer’s symptoms. NfL rate of change accelerated as these individuals got closer to this age.

The researchers found that the rate of change in blood NfL predicted Alzheimer’s disease progression—in particular, damage to neurons—better than absolute levels of NfL. The higher the NfL rate of change, the closer the individual was to the age when symptoms of dementia were expected to start.

This rate of change of NfL in blood was associated with other Alzheimer’s-related brain changes, including an increase in NfL in cerebrospinal fluid in presymptomatic mutation carriers, the study showed. Baseline NfL predicted changes in cortical thinning in the precuneus, a brain region sensitive to Alzheimer’s progression (as shown by magnetic resonance imaging) and cognition (as measured by memory tests). This suggests that NfL changes in blood reflect NfL changes in the brain.

Further studies could focus on determining the time period during which NfL in blood changes, and whether the results in DIAN participants apply to other people at risk for early-onset Alzheimer’s, late-onset Alzheimer’s, or other types of neurodegenerative disease.

This research was funded in part by NIA grant UF1AG032438 to DIAN.