Telmisartan, a medication used to treat high blood pressure, did not improve walking performance in patients with peripheral arterial disease (PAD) in the legs, according to new research. These results challenge previous studies that found telmisartan improved running strength in mice and increased treadmill walking distance in people with PAD. 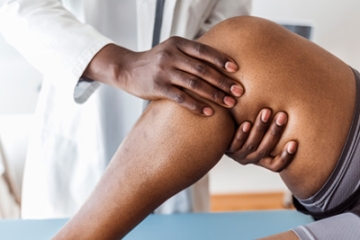 The new findings also indicated people with PAD could improve their walking performance through exercise.

PAD, a condition that affects leg blood vessels, can decrease mobility. It is characterized by narrowed arteries and is common in older adults, especially among Black individuals. Telmisartan works by blocking a hormone that causes blood vessels to narrow, enabling the vessels to relax so blood can flow easier. Doctors often recommend the drug to reduce cardiovascular events, such as heart attack or stroke, in people with PAD.

A team of researchers from NIA and Northwestern, Tulane, Stanford, and other universities randomly assigned 114 participants who had PAD to either receive telmisartan or a placebo. The average age of participants was 67 years; 40% were women and 71% were Black. Participants were randomly assigned walking exercises on a treadmill three times a week with an expert or one-hour educational sessions on health topics with study personnel. The researchers compared results on the six-minute walk distance between the telmisartan and placebo groups at baseline and at a six-month follow-up. In this test, participants covered as much distance as possible within six minutes. The research team evaluated several measures of speed, performance, and function.

Patients already taking telmisartan or a similar drug were not included in this trial. Future research could explore whether the use of blood pressure drugs is less helpful, and perhaps even harmful, in people living with PAD in the legs who do not have high blood pressure.