Although Alzheimer’s disease is a household name, there are many other, lesser-known kinds of dementia. A rare type called frontotemporal dementia (FTD) occurs most often in people under the age of 65. 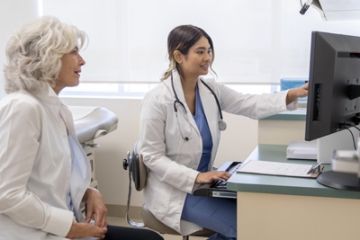 FTD can cause unusual behaviors, emotional problems, and trouble communicating, among other symptoms. About a third of cases of FTD are caused by inherited gene changes, although not everyone who carries such a change will develop the disease.

No treatments currently exist to slow or stop FTD. It’s also difficult to diagnose. Research into new therapies has been slowed by a lack of simple tests to diagnose the disease at an early stage and track its progression.

A protein called neurofilament light chain (NfL) gets released when nerve cells are damaged by FTD and other dementias. Studies have shown that NfL in the cerebrospinal fluid may be useful for tracking FTD. But taking repeated cerebrospinal samples is costly and difficult for patients.

Researchers led by Drs. Tania Gendron and Leonard Petrucelli from the Mayo Clinic tested whether NfL found in blood could be used to diagnose and follow FTD and related dementias. The team used samples taken from almost a thousand volunteers enrolled in a study of frontotemporal diseases. The study included people with inherited FTD and people with FTD that developed sporadically. It also included participants with cognitive impairments caused by other diseases for comparison.

The study was funded in part by NIH’s National Institute on Aging (NIA), National Institute of Neurological Disorders and Stroke (NINDS), and National Center for Advancing Translational Sciences (NCATS). Results were published on April 19, 2022, in Cell Reports Medicine.

In all people with FTD, blood levels of NfL were higher than in people who had cognitive impairments caused by other conditions. Among people who carried a genetic risk factor for FTD, NfL levels in the blood were higher in those who later developed symptoms compared with those who didn’t.

Finally, the researchers looked at the changes in NfL levels over time for participants who had blood samples taken at least a year after they joined the study. Rates of change in NfL levels were higher in people who later developed symptoms.

“There is at present no truly effective treatment for patients with FTD,” Gendron says. “It’s believed that potential treatments will be most beneficial to individuals when administered early in the disease course — soon after symptom onset or ideally even before symptom onset.”

NfL and other potential biomarkers of FTD progression may allow researchers to enroll people in treatment trials early, before symptoms appear, and track the effectiveness of new drugs over time.