New research finds that certain types of lipids in the blood play a role in how the apolipoprotein E (APOE) gene influences Alzheimer’s disease risk. A recently published NIA-supported study in Alzheimer’s & Dementia®: The Journal of the Alzheimer’s Association takes a closer look at the connection among blood lipids, two forms of APOE, and Alzheimer’s. This study suggests that specific blood lipids associated with APOE ε2 could potentially be new targets for Alzheimer’s prevention. 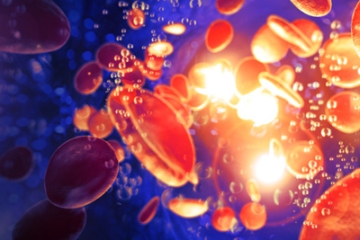 The APOE gene is the strongest genetic risk factor for Alzheimer’s. Two forms of the APOE gene are influential: The ε4 form increases risk, whereas the ε2 form provides resilience or protection against the disease. It is not yet fully clear how various forms of APOE modify the risk.

Researchers analyzed the association between more than 500 blood lipids and APOE ε2 and ε4 to learn which lipids influence APOE ε2 and ε4’s effects on Alzheimer’s risk and resilience. This study was conducted using biosamples and data from three independent cohort studies, including the Alzheimer’s Disease Neuroimaging Initiative.

Several lipid classes were identified as the most common types of lipids in cases of Alzheimer’s that involved APOE ε2 or APOE ε4, including ether lipids, alkyl diacylglycerol, and plasmalogen. The researchers discovered that 11 lipids influenced APOE ε2’s protective effect against Alzheimer’s and 14 influenced APOE ε4’s effect on elevating risk for the disease.

Although more research is needed, the identification of specific lipids as mediators of APOE ε2’s protective effects may open new avenues for preventing Alzheimer’s, including interventions using dietary supplementation.

These activities relate to NIA’s AD+ADRD Research Implementation Milestone 2.B, “Establish new research programs that employ data-driven, systems-based approaches to understand the interaction between peripheral systems (in particular: immune, metabolic, microbiome) and the brain and the impact of this interaction on brain aging and neurodegeneration. These efforts should integrate human and animal model research and characterize the extent to which molecular (epigenomic, transcriptomic, and metabolomic) variation identified in peripheral tissues can be used as a proxy for inter-individual variation in the trajectories of brain aging, AD, and AD-related dementias.”