Women are at greater risk than men for developing Alzheimer’s disease over their lifetimes. The disease also tends to get worse faster in women, and women experience a broader range of cognitive symptoms — those related to thinking, learning, and memory. 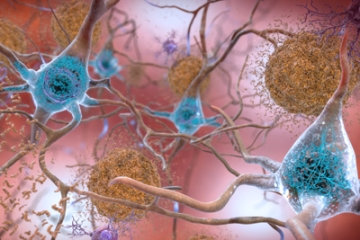 Researchers have been studying whether hormones play a role in these differences between the genders. A team led by Dr. Mone Zaidi from Mount Sinai and Dr. Keqiang Ye from Emory University has been examining the many roles a hormone called follicle-stimulating hormone (FSH) plays in the body.

FSH levels rise sharply in women around the time of menopause. In previous work, the researchers found that blocking FSH in mice can prevent weight gain and reduce bone loss — two other common changes in women’s bodies during and after menopause.

In a new study, the team investigated whether FSH is involved in the development of Alzheimer’s. The work was funded in part by NIH’s National Institute on Aging (NIA). Results were published March 2, 2022, in Nature.

The researchers first put mice engineered to develop Alzheimer’s disease into a menopausal state. Levels of FSH rose in the blood of these mice. They also had accelerated cognitive decline and a buildup of amyloid beta plaques and tau tangles in their brains, which are hallmarks of Alzheimer’s disease.

When the researchers gave the mice an antibody that blocked FSH, these effects were much less severe. Male mice, which produce some FSH, also had less amyloid beta buildup in the brain after treatment with the antibody.

Further experiments found that blocking FSH caused a reduction in certain enzymes called the C/EBPβ-AEP/δ-secretase pathway in neurons within the brain. This pathway contributes to both amyloid beta and tau buildup.

In addition to the work in mice, the team found receptors for FSH in tissue samples taken from human and rat brains. Further work showed that FSH can cross the blood-brain barrier and bind to these receptors on nerve cells.

In both human and rat neurons, when FSH bound to these receptors, it activated the C/EBPβ-AEP/δ-secretase pathway and caused amyloid beta and tau production. Blocking these receptors in the brain with a different technique also decreased Alzheimer’s symptoms in mice.

The team further found that giving injections of FSH to both female and male mice engineered to develop Alzheimer’s accelerated development of the disease. In contrast, differing levels of estrogen, another hormone, didn’t affect the development of cognitive symptoms.

“We are excited and cautiously optimistic that the molecule FSH may play an important role in Alzheimer’s disease, bone loss, and obesity simultaneously,” Zaidi says.

The team has developed an antibody to block FSH in people and is now testing it for safety in animal models. They hope to eventually test it in clinical trials for the prevention of Alzheimer’s as well as bone loss and obesity.