A protein called tau plays an important role in maintaining the structure of normal neurons in the brain. But sometimes, tau within a neuron becomes misfolded. When this happens, the misfolded protein can cause other tau molecules to misfold. This chain reaction can spread through nearby neurons, leading to accumulations of tangled tau that cause substantial numbers of brain cells to die. 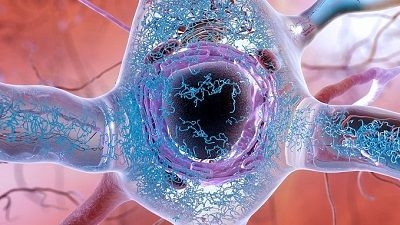 Tau tangles and the damage they cause are thought to contribute to many types of dementia. These include Alzheimer’s dementia, some frontotemporal disorders, and chronic traumatic encephalopathy. If researchers better understood how tau moves from neuron to neuron, new therapies might be developed to block its spread.

Based on previous studies, an international team led by Drs. Jennifer Rauch and Kenneth Kosik from the University of California, Santa Barbara, suspected that low-density lipoprotein receptors (LDLRs) might play a role in bringing tau into cells. These receptors sit on the outside of neurons, helping the cells to bring in cholesterol and other vital molecules. Using a technique called CRISPR interference technology, they blocked a series of LDLR family members, one by one, from being produced in neurons grown in the lab.

When the researchers blocked an LDLR called LRP1 from being made, tau was almost completely stopped from entering the cells. Blocking LRP1 also stopped the uptake of a disease-related mutant form of tau as well as small clumps of tau, which form prior to the development of tau tangles. Blocking other LDLR family members didn’t affect tau uptake.

The team next identified two different parts of the tau protein that could bind to LRP1 and trigger the uptake of tau into cells.

To see if their results held up in the body, the researchers used a system to suppress LRP1 in the brains of mice. Two weeks after suppression, they introduced tau into a region of the brain known to be important to memory, the hippocampus. In control mice, tau spread away from the site of injection into other regions of the brain, as it would in many types of dementia. In contrast, the spread of tau out of the hippocampus was greatly diminished in the mice lacking LRP1. These findings suggest that LRP1 is an important regulator of tau uptake and spread in the brain.

“The discovery of a mechanism by which tau transits from cell to cell provides a clue that will open up a deep structural approach to the design of molecules that can prevent tau spread,” Kosik says.

LRP1 performs many functions in the brain, so targeting the receptor directly wouldn’t likely be a practical approach for developing drugs to block the spread of tau. But the interaction between LRP1 and tau may not be necessary for healthy neurons. The researchers are now focusing on specifically targeting the relationship between tau and LRP1.