The NIH’s National Institute on Aging (NIA) broadly invests in research to find ways to help people live longer and healthier. As people age, they are more likely to have multiple chronic diseases, and NIA-supported research studies reflect a strong focus on geroscience. This advancing area of science seeks to understand the mechanisms that make aging a major risk factor and driver of common chronic conditions and diseases of older people. 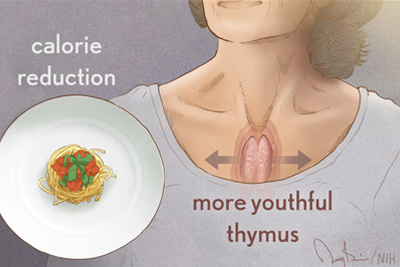 More than 85 years ago, researchers at Cornell University, Ithaca, New York, observed that some lab rodents lived longer when fed a lower calorie diet that otherwise had the appropriate nutrients1. Since then, many scientists have studied calorie restriction to shed light on the various biological mechanisms that may explain its benefits and perhaps discover a way to extend healthy years of life, known as our healthspan.

Although there have been many studies of calorie restriction since the Cornell findings, the NIA-supported clinical trial CALERIE, which stands for Comprehensive Assessment of Long-term Effects of Reducing Intake of Energy, provided critical data on the impact of this intervention in people. Completed in 2012, CALERIE was the first carefully controlled study to test whether study participants undergoing moderate calorie restriction would display any of the benefits observed in animal studies.

Volunteers for the CALERIE study were healthy, non-obese adults ages 25 to 45. People in one group were randomly assigned to continue their customary dietary choices, and those in the second group were trained by an expert team of psychologists and dietitians to restrict calories through specific strategies, such as eating smaller servings of food.

In addition to demonstrating that people could sustain moderate calorie restriction for two years, the CALERIE study also showed that this intervention could diminish risk factors for age-related cardiovascular and metabolic diseases2. The CALERIE investigators also made their data and biological samples available for other research teams to study further.

As people age, the size of the thymus, which is part of the immune system, tends to become smaller. As this organ shrinks, its output of T cells declines, which hampers the ability of the immune system to combat infectious diseases. This deficiency of T cells is one of the reasons people over age 40 are at increased susceptibility for a range of diseases.

Dixit’s team noted that MRI scans showed the thymus volume increased among people who reduced their calories for the two-year CALERIE study but was not significantly different in the control group. The increase in thymus size in the group restricting calories was accompanied by an increase in indicators of new T cell production.

Next, the team analyzed immune system effects in belly fat samples from people in the CALERIE study. The team discovered that the PLA2G7 gene — which codes for a protein involved in fat metabolism that is made by immune cells such as T cells — was suppressed after calorie restriction, with evidence that the suppression occurred in immune cells present in fat. They hypothesized that the PLA2G7 gene could have played a role in the improved thymus function resulting from calorie restriction.

To test this hypothesis, the team suppressed the PLA2G7 gene in lab mice. When these mice were 2 years old, which is equivalent to a human age of about 70, the thymus had not decreased in volume. In addition, the mice had decreased fat mass and lower levels of certain inflammation-promoting substances. These findings suggest that mice without the PLA2G7 gene might have been protected from age-related chronic inflammation, which has been linked to many conditions of old age.

Taken together, the findings extend our understanding of the power of calorie restriction and suggest that it might also improve immune function and reduce chronic inflammation in people. The results also indicate interventions that influence PLA2G7 gene function might have favorable health effects. Additional research is still needed to assess the health effects and to determine whether calorie restriction extends lifespan or healthspan in humans. The NIA is funding more studies to determine the benefits and risks of calorie restriction, as well as the mechanisms that account for its effects.

What Do We Know About Healthy Aging? (NIA)

Calorie Restriction and Fasting Diets: What Do We Know? (NIA)