A protein that blocks one of the two insulin pathways in ants may explain how queen ants live much longer than workers, according to an NIA-funded study. The findings show that a protein called Imp-L2, produced in the ovaries of reproductive ants, which are queens and gamergates (worker ants that are not queens but can reproduce), suppresses the insulin pathway that controls aging. The other insulin pathway, which controls egg formation and metabolism, is activated in queens and gamergates. Published in Science, the research may explain the unusual longevity and increased fertility of reproductive ants. 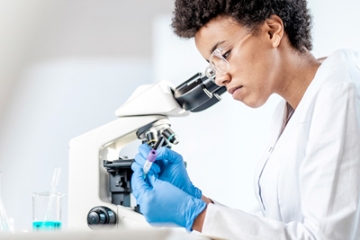 Despite having the same genome, egg-producing queens and gamergates exhibit strikingly long lifespans compared to nonreproductive female worker ants. To understand why reproductive ants live such long lives, a team of researchers from New York University, University of Florida, and South China Agricultural University focused on a species of ant called Harpegnathos saltator (commonly known as the Indian jumping ant). Harpegnathos queens live for approximately five years, while nonreproductive workers have a lifespan of around seven months. When the queen dies, female worker ants duel each other in ritual fights to establish dominance, which is used to determine a division of reproductive labor. The “winners” undergo major physiological changes, including ovary development that changes them into egg-laying gamergates. Insulin signaling needs to increase for the ovary to make eggs, decreasing lifespan in some species. However, gamergates have a five-times longer lifespan than if they had remained workers, and their lifespan shortens if they return to being workers.

The scientists found gamergates produced more insulin in their brains and less insulin in their fat bodies compared to workers and gamergates that reverted to workers. In insects, the fat body regulates metabolic, endocrine, and immune functions and coordinates with the brain to regulate insulin signaling. The increased insulin in the gamergate brain activates ovary development, which prompts the ovary to produce the anti-insulin protein lmp-L2. Imp-L2 decreases signaling in the insulin pathway responsible for aging, contributing to a longer lifespan. Though the study is in insects, there are similar insulin pathways and anti-insulin proteins in humans that may also offer insight into longevity research for people.