The protein apolipoprotein E (APOE) plays a key role throughout the body. It helps to transport cholesterol and other fatty molecules, or lipids. The gene that produces APOE comes in a few different varieties. The most common is called APOE3. 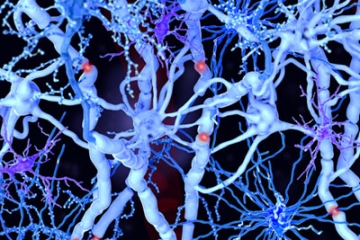 The most notorious is APOE4, which has long been linked to an increased risk of dementia in Alzheimer’s disease. People who inherit one copy of the APOE4 gene have up to a fourfold greater risk of developing Alzheimer’s dementia. Inheriting two copies of APOE4 elevates the risk up to 12-fold. But despite years of study, scientists have little understanding of how APOE4 affects the human brain and boosts dementia risk.

Earlier research by Dr. Li-Huei Tsai of the Massachusetts Institute of Technology and others found that APOE4 might raise Alzheimer’s risk by altering lipid metabolism in certain brain cells. But the underlying details of the process remained unclear.

To build on these findings, the team conducted a multipronged study that assessed gene activity of all major cell types in postmortem human brain tissue from 32 men and women who had one, two, or no copies of the APOE4 gene. Results were published in Nature on Nov. 16, 2022.

The researchers found that APOE4 affected gene expression across all measured cell types. The team then took a closer look at genes related to cholesterol and other lipids. Cholesterol-manufacturing genes were overly expressed, and cholesterol-transporting genes dysregulated, in brain cells called oligodendrocytes with the APOE4 gene. Oligodendrocytes are found in the brain and spinal cord. They make and maintain a fatty substance called myelin that surrounds and insulates long nerve fibers. The abnormalities were more extreme in oligodendrocytes with two copies of APOE4 rather than one.

To better understand how APOE4 affects oligodendrocytes, the scientists created laboratory cultures of the cells with and without the APOE4 gene. Oligodendrocytes with APOE4 tended to accumulate abnormal amounts of cholesterol within their cells, rather than using it to make healthy myelin sheaths around nerve fibers. When the scientists examined postmortem human brains, they noted that myelin sheaths tended to be fewer and thinner in brains that carried the APOE4 gene.

The scientists next used model systems to test whether APOE4-related abnormalities might be reversed via drugs that affect cholesterol processing. They found that a drug called cyclodextrin, which promotes cholesterol transport, reduced cholesterol buildup and improved myelin sheath formation in cultured oligodendrocytes. It did the same in mice with two copies of APOE4. The mice also performed slightly better in learning and memory tasks after treatment with the drug.

These findings open new avenues for exploring the underlying mechanisms of Alzheimer’s dementia and for designing potential therapeutics.

“It’s encouraging that we’ve seen a way to rescue oligodendrocyte function and myelination in lab and mouse models,” Tsai says. “I feel that lipid dysregulation could be very fundamental biology underlying a lot of the pathology we observe.”