Postmaster General Megan J. Brennan dedicated a stamp today to fund research to help find a cure for one of the top 10 leading causes of death — Alzheimer's. 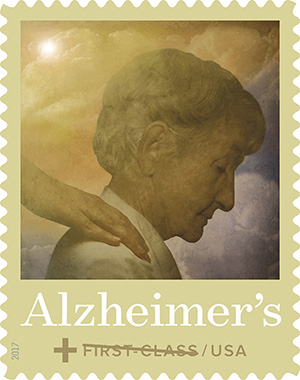 The price of the stamp includes the First-Class Mail single-piece postage rate in effect at the time of purchase plus an amount to fund Alzheimer's research. By law, revenue from sales of the Alzheimer's Semipostal stamp — minus the postage paid and the reimbursement of reasonable costs incurred by the Postal Service — will be distributed to the National Institutes of Health, which is part of the U.S. Department of Health and Human Services.

"The Postal Service is proud to issue this stamp today to help raise public awareness of Alzheimer's," said Brennan. "Proceeds from its sale will help support urgently needed medical research into this incredibly debilitating disease."

"We're in a new age of Alzheimer's research with a number of efforts underway," said Bernard. "NIA is working to identify new genes that affect Alzheimer's disease and their role as risk factors or protective factors, to explore imaging techniques and ways to detect development of the disease well before symptoms appear, to develop and test new therapies, and to test and implement new approaches to providing care and supporting caregivers. The new semipostal stamp will both raise awareness of Alzheimer's research and care, as well as contribute to the search for effective ways to prevent and treat this heart-breaking disease."

"Johns Hopkins Bayview has a long history of geriatric care and research," said Bennett. "We are honored to host the dedication of the United States Postal Service's Alzheimer's Semipostal stamp. Proceeds from the sale of this beautiful stamp will benefit the next generation of research at the National Institutes of Health. We hope this research will lead to new answers for our patients and their families who live with the everyday realities of Alzheimer's disease."

Also attending was Kathy Siggins of Mount Airy, MD, who followed the discretionary semipostal program criteria for submitting the stamp suggestion. Siggins' husband succumbed to the disease in 1999.

The artwork is an illustration that first appeared on the 2008 42-cent Alzheimer's Awareness stamp. It shows an older woman in profile with a hand on her shoulder, the suggestion of sunlight behind her, and clouds in front of and below her. On the 2008 stamp, she was facing left; the artwork for this stamp shows her facing right to help differentiate between the two stamps. Stamp artist Matt Mahurin of Topanga Canyon, CA, worked under the direction of art director Ethel Kessler of Bethesda, MD.

A Heart-Breaking Disease Affecting Millions of Individuals and Caregivers

According to the Centers for Disease Control, Alzheimer's is one of the top 10 leading causes of death in the United States. It destroys the minds of those affected by it and poses challenges for family members and caregivers. It is the most common form of dementia, but is not a normal part of aging.

The disease is named after Alois Alzheimer, the German physician who in 1906 discovered and described two hallmark signs of the disease in the brain — clumps of amyloid protein fragments and tangles of tau protein fibers — and linked them to observable symptoms.

While there is not yet a cure for Alzheimer's or a way to prevent it, public support has intensified the search for ways to treat its symptoms, slow its progression, and care for those who live with the disease. In 2012, the U.S. Department of Health and Human Services released a "National Plan to Address Alzheimer's Disease" that addresses the many challenges faced by patients, researchers and caregivers. The plan offered a coordinated effort to prevent and effectively treat the disease by the year 2025 and called for improvements in clinical and long-term care.

According to the Alzheimer's Association, more than 5.3 million Americans age 65 and older are estimated to have Alzheimer's disease, a number predicted to rise as the population ages. Net proceeds from this stamp will be distributed to the U.S. Department of Health and Human Services, all part of a national effort to find ways to prevent, treat, and someday stop this disease.

The Semipostal Authorization Act, Pub. L. 106–253, grants the Postal Service discretionary authority to issue and sell semipostal fundraising stamps to advance such causes as it considers to be ''in the national public interest and appropriate.'' Under the program, the Postal Service intends to issue five semipostal fundraising stamps over a 10-year period, with each stamp to be sold for no more than two years. The Alzheimer's Semipostal stamp is the first and will be followed by a Post-Traumatic Stress Disorder (PTSD) semipostal stamp to be issued in 2019. The next three discretionary semipostal stamps have not yet been determined.