Alzheimer’s progression in Down syndrome appears similar to other genetic, early onset forms of the disease

Amyloid plaques — protein clumps that are one of the hallmarks of Alzheimer’s disease — occur at roughly the same level in the brains of people with Down syndrome who have Alzheimer’s as they do in people with forms of hereditary, early-onset Alzheimer’s, according to research funded by the National Institutes of Health. Based on the largest study of its kind to date, the findings suggest that individuals with Alzheimer’s and Down syndrome may benefit from participating in studies on Alzheimer’s therapies aimed at slowing formation of amyloid plaques. 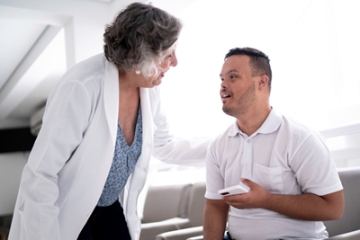 The study was conducted by Beau Ances, M.D., Ph.D., of Washington University in St. Louis, and colleagues from the Dominantly Inherited Alzheimer Network (DIAN) and the Alzheimer’s Biomarkers Consortium–Down Syndrome (ABC-DS). It appears in Lancet Neurology. NIH funding was provided by the National Institute on Aging (NIA), the Eunice Kennedy Shriver National Institute of Child Health and Human Development (NICHD), and the Investigation of Co-Occurring Conditions Across the Lifespan to Understand Down Syndrome Project.

Plaques are composed largely of aggregated beta-amyloid proteins, which are encoded by the amyloid precursor protein (APP) gene and found on chromosome 21. Because people with Down syndrome are born with an extra full or partial copy of chromosome 21, they have three copies of the APP gene. This causes them to produce too much beta-amyloid protein, leading to the formation of plaques.

For the current study, researchers periodically conducted MRI and amyloid positron emission tomography scans of the brains of people with Down syndrome. They then compared the results to brain scans of people who have early-onset Alzheimer’s, resulting from inheriting pathogenic variants of the APP gene or the PSEN1 or PSEN2 genes, which code for enzymes that break down amyloid precursor proteins.

The study involved 192 individuals with Down syndrome and 33 sibling controls from the ABC-DS trial. It also involved 265 carriers of either the APP, PSEN1, or PSEN2 variants and 169 non-carrier family members who were participants in the NIA-funded DIAN trial, also part of the control group.

“Multiple pathways may mediate brain damage in Alzheimer’s disease and related dementias,” said Richard J. Hodes, M.D., NIA Director. “Studies like this can help researchers understand the commonalities or differences in pathways that mediate brain damage in distinct at-risk populations, such as those with Down syndrome and those with dominantly inherited early-onset Alzheimer’s. These findings may thus provide clues to developing treatments for these devastating disorders.”

Overall, the amount of amyloid burden was similar in the brains of people with Down syndrome to those who carry the gene variants for early-onset forms of Alzheimer’s disease. For both groups, levels of brain amyloid were higher than the control group. In addition, the participants with Down syndrome and early-onset Alzheimer’s who showed signs of cognitive decline on thinking and memory tests had higher levels of amyloid than their counterparts who showed no signs of cognitive decline.

One difference between the two groups was seen in the pattern of brain amyloid plaque formation. The participants who had early-onset Alzheimer’s had plaques in all areas of the cerebral cortex, the outermost layer of the brain. In contrast, the brains of people with Down syndrome did not have plaque deposits in the middle of the occipital lobe, the portion of the cerebral cortex at the back of the brain.

About the Eunice Kennedy Shriver National Institute of Child Health and Human Development (NICHD): NICHD leads research and training to understand human development, improve reproductive health, enhance the lives of children and adolescents, and optimize abilities for all. For more information, visit https://www.nichd.nih.gov.

About the National Institutes of Health (NIH): NIH, the nation’s medical research agency, includes 27 Institutes and Centers and is a component of the U.S. Department of Health and Human Services. NIH is the primary federal agency conducting and supporting basic, clinical, and translational medical research, and is investigating the causes, treatments, and cures for both common and rare diseases. For more information about NIH and its programs, visit https://www.nih.gov.