Rather than repairing DNA damage randomly across the genome, neurons appear to focus on mending sections that have genes key to their identity and function, according to a study supported in part by NIA. The findings, which were published in Science, provide a basis for understanding age-related degeneration of the nervous system, and may lead to new strategies for treating diseases such as Alzheimer’s and Parkinson’s. The research was led by scientists at the Salk Institute for Biological Studies, La Jolla, California. 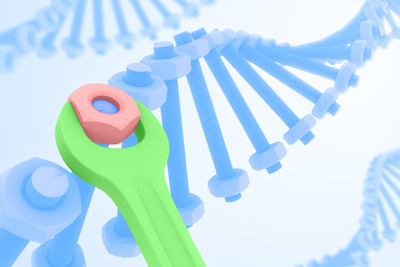 Unlike other cell types, neurons generally cannot be regenerated, so we carry the ones generated in early development throughout our lives. Neurons’ longevity makes it especially important that they continually repair damage to their genome, which holds the genetic instructions they need to function. DNA is damaged through normal cellular wear and tear, and while cells possess the ability to make repairs, that ability does not function as well with increasing age. Research has shown that a decline in DNA maintenance in neurons is linked to a decrease in their function, which may contribute to age-related neurodegenerative diseases.

To learn more about how neurons maintain their DNA, the study’s authors developed a technique they called Repair-seq, which enables them to locate areas in the neuronal genome undergoing repair. Using the new method, they found that neurons concentrate their efforts on specific sections or “hot spots,” rather than fixing errors randomly across the genome. There were roughly 61,000 hot spots, covering about 1.6% of the genome.

When they examined the DNA in the hot spots, they found that it contains a number of genes critical to neurons’ identity and function. They also examined the proteins associated with hot spots and discovered that some showed changes similar to those seen in Alzheimer’s disease. This suggests that impaired DNA repair may contribute to the onset or progression of Alzheimer’s, according to the authors.

By suggesting that neurons respond to age-related deterioration in their DNA repair capacity by prioritizing the maintenance of key genes, the findings provide a new perspective on age-related diseases, and might lead to novel DNA repair-based therapeutic approaches. In addition, Repair-seq offers a powerful new tool for exploring the role of DNA repair in other cell types in various disease states or during the aging process.

These activities relate to NIH’s AD+ADRD Research Implementation Milestone 2.C, “Create research programs on epigenetics to understand how genetic and environmental factors interact across the lifespan to influence brain aging and risk for disease and to identify potential targets for treatment and prevention.”