Aging insights from reptiles and amphibians

Aging rates vary widely across animal species. Understanding how species evolved to age at different rates can provide insight into how much aging might be altered in humans. One way to examine this is to compare aging rates and longevity across many species in the wild. Previous such comparisons have focused on birds and mammals. Although some of the longest-lived vertebrate species are reptiles or amphibians, there have been few comparisons of aging among them. 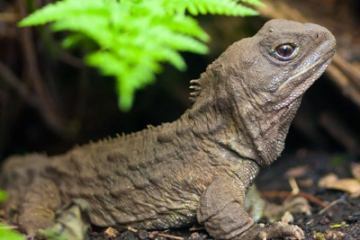 In a new study, a team of more than 100 researchers compiled datasets on aging and longevity collected from reptiles and amphibians in the wild. The data included 107 populations representing 77 species. The team examined this data as well as corresponding data on birds and mammals. This allowed them to test several different hypotheses about aging. The results of the study, which was funded in part by NIH, appeared in Science on June 23, 2022.

Another hypothesis suggests that protective traits, like hard shells or poison, contribute to slower aging. The researchers found this to be the case in reptiles and amphibians. Species with physical protection, such as turtles, lived longer than other species.

The team also found that reptiles that began to reproduce at later ages aged more slowly and lived longer. Amphibians that began to reproduce at later ages lived longer but did not age more slowly. However, amphibian aging did depend on the number of eggs produced per year. Species that produced more eggs per year aged faster. These findings are in line with a hypothesis that aging rates, longevity, and reproductive life history evolve together.

“Anecdotal evidence exists that some reptiles and amphibians age slowly and have long lifespans, but until now no one has actually studied this on a large scale across numerous species in the wild,” says senior author Dr. David Miller. “If we can understand what allows some animals to age more slowly, we can better understand aging in humans, and we can also inform conservation strategies for reptiles and amphibians, many of which are threatened or endangered.”

In a related study in the same issue of Science that was also supported by NIH, researchers from the University of Southern Denmark studied aging rates in 52 turtle and tortoise species living in captivity. About three-quarters of these species had slow-to-negligible aging rates. About 80% aged more slowly than humans. This supports the findings of the first study that species with protection, like shells, tend to age slowly and live for a long time.