As female deer age, they become less social and move to smaller, more isolated areas, according to an NIA-funded study published in Nature Ecology & Evolution. These social network changes are driven by spatial and social behavioral changes by individual deer rather than by changes in the deer population. This international study, led by researchers at Georgetown University, is part of the Animal Models for the Social Dimensions of Health and Aging Research Network, a multidisciplinary research network that aims to support and develop animal models and comparative research on understanding the social determinants of health and aging. 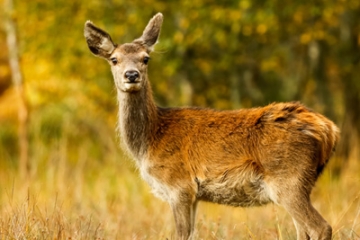 In both humans and animals, social networking tends to decline with age. To better understand the factors that may account for this, the researchers examined 46 years of social connection data collected on a wild population of European female red deer. (There are varying lifespan estimates, but some suggest these deer can live up to 20 years, although few live longer than 16 years.) Analyzing more than 200,000 observations of 712 deer, the researchers examined changes in three related social network measures over time: average group size, the number of connections per deer, and connection strength. Researchers saw age-related declines in all three measures with older deer living in smaller groups, with fewer contacts, and with weaker social connections.

Demographic changes in the deer population did not explain the loss of social connection in the older deer. For example, the analysis showed that the death of a close associate did not affect social connections and suggested that new contacts helped to replace those lost. Researchers concluded that the age-related social decline was not associated with changes in the group but instead were driven by changes within the individual deer.

To examine factors in the deer’s environment, the researchers plotted the distribution of the deer, by age, across the study landscape. The younger deer were near the center of the population. As the deer aged, they moved away from the center, with the oldest deer settling on the outer fringes of the landscape to smaller, less populated areas with lower quality grazing.

Notably, the deer’s spatial changes could not fully account for the deer’s social decline. To identify other contributing factors, researchers note that data is needed on aging deer’s physical and behavioral changes. For example, older deer may avoid more competitive or aggressive young deer. Also, as deer age, their teeth flatten, making it harder to chew and digest heartier plants. Hence, the researchers hypothesize, the deer may move to the landscape edges to access longer grasses and experience less competition.

While more research is needed to pinpoint exactly why deer become less social as they age, this study provides important insights into the ecological and evolutionary factors that contribute to social connections in aging animals. More research is needed on the effects of social dynamics on individual animals and age-related physiological changes on an animal’s social network. These findings also prompt intriguing questions for future research on the factors that affect human social connections in aging.