A new study has found further evidence that neurofilament light chain (NfL), a protein that can be detected in blood and presumably reflects neuronal death, is a possible biomarker for familial Alzheimer’s disease. Biomarkers can help researchers track the progress of a disease and evaluate the effectiveness of a treatment. Developing a blood-based biomarker would potentially provide less invasive and less expensive ways to detect early signs of Alzheimer’s and related dementias. 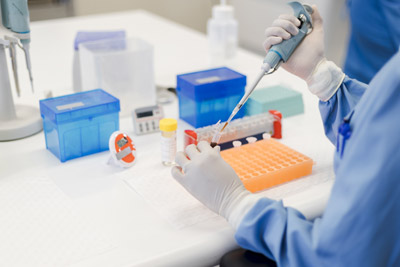 Published in Lancet Neurology, the NIH-funded study involved about 2,100 members between the ages of 8 and 75 of the Colombian autosomal dominant Alzheimer’s disease kindred, a group of related families living in Antioquia, Colombia. The kindred group has approximately 5,000 members, including 1,500 carriers of a genetic mutation that causes early-onset Alzheimer’s disease. Those who have the mutation, presenilin 1 (PSEN1) E280A, almost always develop mild cognitive impairment at about age 44 and Alzheimer’s disease at around age 49.

For the current study, half of the participants had the PSEN1 E280A mutation. Conducted by researchers at multiple centers, including Massachusetts General Hospital and Harvard Medical School; Universidad de Antioquia, Medellín, Colombia; and Sahlgrenska University Hospital, Gothenburg, Sweden, the study analyzed baseline plasma NfL measures for the 2,100 participants and longitudinal measures dating back about six years for 242 mutation carriers and 262 noncarriers for whom data was available. Baseline and longitudinal cognitive assessments were also completed.

The study found that NfL concentrations increased with age in both groups but began to differ between carriers and noncarriers at around age 22, about 22 years before the average age of onset for mild cognitive impairment. Those early differences were too subtle to differentiate between carriers and noncarriers until they were closer to the age of clinical onset. Baseline and follow-up NfL concentrations in the blood were also associated with degeneration of the brain’s neurons, injury to the neurons’ axons, and cognitive decline among carriers compared to noncarriers.

Previous studies have found that NfL concentrations can identify those who carry different autosomal dominant Alzheimer’s disease mutations when the individual is within seven years of first showing symptoms. Studies have also associated NfL with greater cognitive decline in those who carry the mutation. This study extends those findings by identifying the age at which NfL blood concentrations in PSEN1 E280A carriers and noncarriers begin to diverge.

It is not yet known whether NfL would be a useful biomarker for those with sporadic Alzheimer’s disease, the most common form. The authors conclude that the study supports NfL as a blood-based biomarker of neurodegeneration that can detect and track autosomal dominant Alzheimer’s disease. Plasma NfL may also be helpful in evaluating disease-modifying therapies in the future. One of the next steps for this research is to track other biomarkers along with plasma NfL to confirm that this biomarker would be useful in therapeutic trials.

These activities relate to NIA’s AD+ADRD Research Implementation Milestone 9.A, ”Develop and validate translatable biomarkers for their use in preclinical and clinical drug development. These efforts should include the development of pharmacodynamic biomarkers of target engagement, biomarkers of incipient disease (ocular, olfactory) and biomarkers for detection and tracking of synaptic dysfunction.”