In a new study, scientists have identified a specialized type of immune cell in the blood, cerebrospinal fluid (CSF) and brain tissue of people with Alzheimer’s disease, adding to evidence of the immune system’s role in Alzheimer’s. The study, published Jan. 8, 2020, in Nature, was led by a research team at the Stanford University School of Medicine and funded in part by NIA. 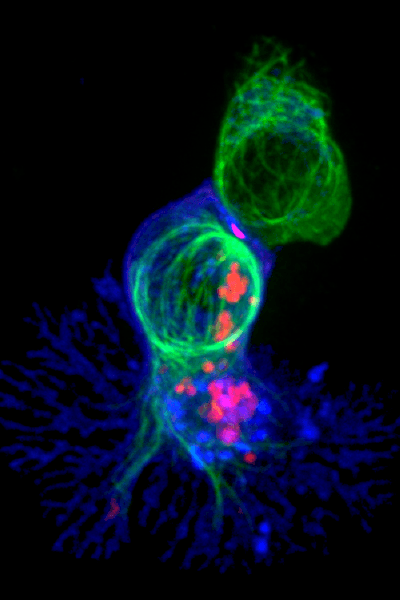 Much of past efforts to understand the immune system’s role in Alzheimer’s has been focused on the innate immune system, which is a non-specific response to any foreign invader. In this study, the scientists discovered that specialized immune cells called CD8+ T effector memory CD45RA+ (TEMRA) were associated with the neurodegenerative process of Alzheimer’s and mild cognitive impairment (MCI), a common precursor of Alzheimer’s. These TEMRA cells are part of the adaptive immune system, which is made up of “killer” cells and processes that, after exposure to a specific disease-causing organism, learn to eliminate the organism or prevent its growth.

The scientists wanted to know if TEMRA cells were somehow related to other biological processes seen in the brain in Alzheimer’s. To find out, they examined the blood, CSF and brain tissue of cognitively normal people and people with Alzheimer’s or MCI.

The researchers found further evidence of how TEMRA cells may influence the development of Alzheimer’s by looking at brain tissue. They found more CD8+ T cells — a type of immune cell that includes the subtype TEMRA — in the hippocampus (a brain region affected by Alzheimer’s) and near beta-amyloid plaques (protein deposits that indicate the disease) in those who’d had Alzheimer’s versus those who had been cognitively normal.

The researchers also found evidence of “clonal expansion” — in which a T cell receptor responds to particular infectious agents by proliferating to form clones of itself — of CD8+ T cells, including TEMRA cells. This inflammatory clonal expansion, revealed by sequencing methods, was higher in the CSF of people with Alzheimer’s, MCI, or Parkinson’s disease than in the CSF of normal controls.

“This is perhaps the first evidence that clonally expanded T cells invade the CSF in age-related neurodegenerative diseases,” wrote Michael T. Heneka of the German Center for Neurodegenerative Disease, in an accompanying commentary.

Finally, the investigators tried to find the proteins driving the clonal expansion of TEMRA cells. In three people with Alzheimer’s, they found evidence of two toxins produced by the Epstein-Barr virus, a common type of herpes virus; however, it is unclear what role, if any, this virus plays in the development of Alzheimer’s.

Altogether, the findings add to an emerging understanding of how the adaptive immune system may affect the brain deterioration underlying disorders like Alzheimer’s. But the study involved relatively few people, and larger studies are needed to identify the substances that activate CD8 T cells in Alzheimer’s and explore their role in Alzheimer’s neurodegeneration.

It relates to NIA’s AD+ADRD Research Implementation Milestone 2.B. “Establish new research programs that employ data-driven, systems-based approaches to understand the interaction between peripheral systems (in particular: immune, metabolic, microbiome) and the brain and the impact of this interaction on brain aging and neurodegeneration. These efforts should integrate human and animal model research and characterize the extent to which molecular (epigenomic, transcriptomic and metabolomic) variation identified in peripheral tissues can be used as a proxy for inter-individual variation in the trajectories of brain aging, AD and AD-related dementias.”