Parkinson’s disease is a brain disorder that causes unintended or uncontrollable movements, such as shaking, stiffness, and difficulty with balance and coordination.

Symptoms usually begin gradually and worsen over time. As the disease progresses, people may have difficulty walking and talking. They may also have mental and behavioral changes, sleep problems, depression, memory difficulties, and fatigue. 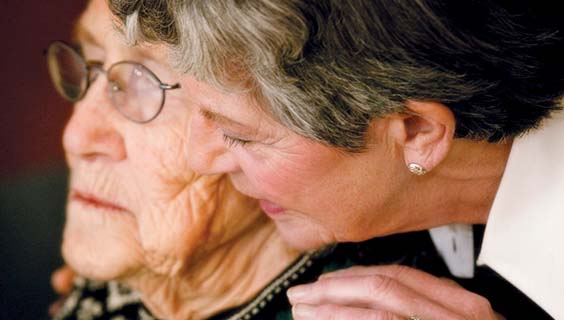 While virtually anyone could be at risk for developing Parkinson’s, some research studies suggest this disease affects more men than women. It’s unclear why, but studies are underway to understand factors that may increase a person’s risk. One clear risk is age: Although most people with Parkinson’s first develop the disease after age 60, about 5% to 10% experience onset before the age of 50. Early-onset forms of Parkinson’s are often, but not always, inherited, and some forms have been linked to specific alterations in genes.

The most prominent signs and symptoms of Parkinson’s disease occur when nerve cells in the basal ganglia, an area of the brain that controls movement, become impaired and/or die. Normally, these nerve cells, or neurons, produce an important brain chemical known as dopamine. When the neurons die or become impaired, they produce less dopamine, which causes the movement problems associated with the disease. Scientists still do not know what causes the neurons to die. 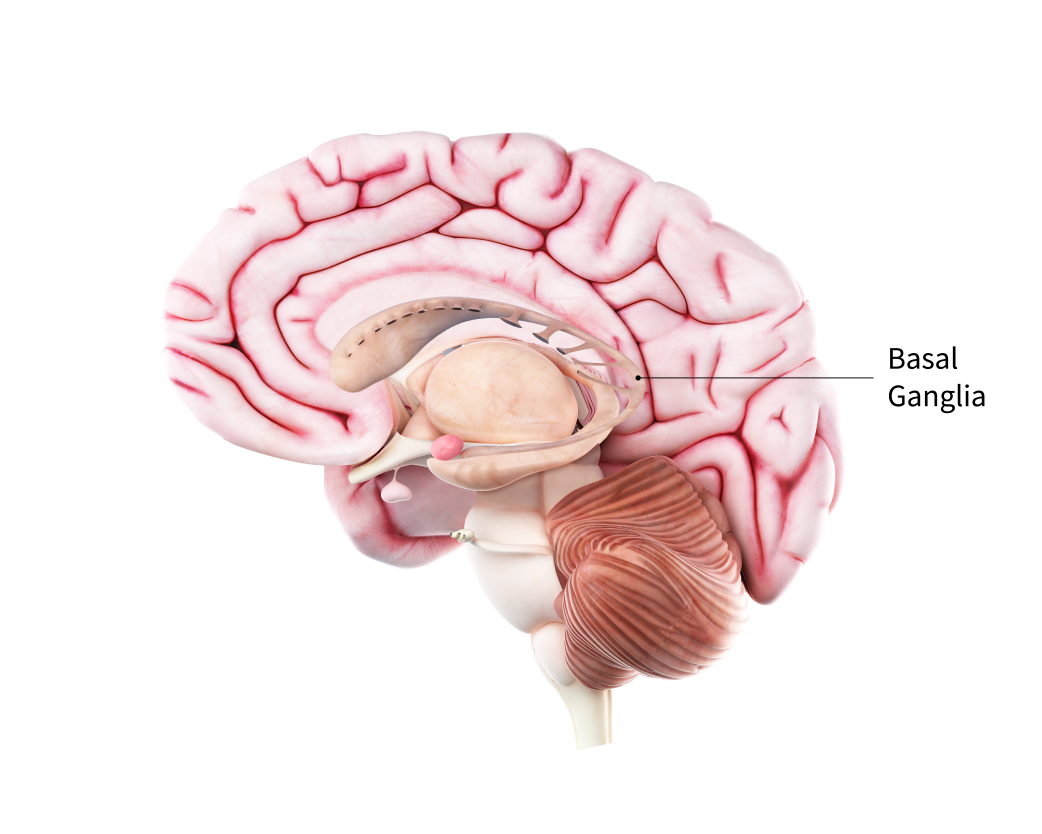 People with Parkinson’s disease also lose the nerve endings that produce norepinephrine, the main chemical messenger of the sympathetic nervous system, which controls many functions of the body, such as heart rate and blood pressure. The loss of norepinephrine might help explain some of the non-movement features of Parkinson’s, such as fatigue, irregular blood pressure, decreased movement of food through the digestive tract, and sudden drop in blood pressure when a person stands up from a sitting or lying position.

Many brain cells of people with Parkinson’s disease contain Lewy bodies, unusual clumps of the protein alpha-synuclein. Scientists are trying to better understand the normal and abnormal functions of alpha-synuclein and its relationship to genetic variants that impact Parkinson’s and Lewy body dementia.

Some cases of Parkinson’s disease appear to be hereditary, and a few cases can be traced to specific genetic variants. While genetics is thought to play a role in Parkinson’s, in most cases the disease does not seem to run in families. Many researchers now believe that Parkinson’s results from a combination of genetic and environmental factors, such as exposure to toxins.

Other symptoms may include:

The symptoms of Parkinson’s and the rate of progression differ among individuals. Early symptoms of this disease are subtle and occur gradually. For example, people may feel mild tremors or have difficulty getting out of a chair. They may notice that they speak too softly, or that their handwriting is slow and looks cramped or small. Friends or family members may be the first to notice changes in someone with early Parkinson’s. They may see that the person’s face lacks expression and animation, or that the person does not move an arm or leg normally.

People with Parkinson's disease often develop a parkinsonian gait that includes a tendency to lean forward; take small, quick steps; and reduce swinging their arms. They also may have trouble initiating or continuing movement.

Many people with Parkinson’s disease note that prior to experiencing stiffness and tremor, they had sleep problems, constipation, loss of smell, and restless legs. While some of these symptoms may also occur with normal aging, talk with your doctor if these symptoms worsen or begin to interfere with daily living.

Changes in cognition and Parkinson’s disease

Some people with Parkinson’s may experience changes in their cognitive function, including problems with memory, attention, and the ability to plan and accomplish tasks. Stress, depression, and some medications may also contribute to these changes in cognition.

Talk with your doctor if you or a loved one is diagnosed with Parkinson’s disease and is experiencing problems with thinking or memory.

There are currently no blood or laboratory tests to diagnose non-genetic cases of Parkinson’s. Doctors usually diagnose the disease by taking a person’s medical history and performing a neurological examination. If symptoms improve after starting to take medication, it’s another indicator that the person has Parkinson’s.

A number of disorders can cause symptoms similar to those of Parkinson’s disease. People with Parkinson’s-like symptoms that result from other causes, such as multiple system atrophy and dementia with Lewy bodies, are sometimes said to have parkinsonism. While these disorders initially may be misdiagnosed as Parkinson’s, certain medical tests, as well as response to drug treatment, may help to better evaluate the cause. Many other diseases have similar features but require different treatments, so it is important to get an accurate diagnosis as soon as possible.

Although there is no cure for Parkinson’s disease, medicines, surgical treatment, and other therapies can often relieve some symptoms.

Medicines can help treat the symptoms of Parkinson’s by:

The main therapy for Parkinson’s is levodopa. Nerve cells use levodopa to make dopamine to replenish the brain’s dwindling supply. Usually, people take levodopa along with another medication called carbidopa. Carbidopa prevents or reduces some of the side effects of levodopa therapy — such as nausea, vomiting, low blood pressure, and restlessness — and reduces the amount of levodopa needed to improve symptoms.

People living with Parkinson’s disease should never stop taking levodopa without telling their doctor. Suddenly stopping the drug may have serious side effects, like being unable to move or having difficulty breathing.

The doctor may prescribe other medicines to treat Parkinson’s symptoms, including:

For people with Parkinson’s disease who do not respond well to medications, the doctor may recommend deep brain stimulation. During a surgical procedure, a doctor implants electrodes into part of the brain and connects them to a small electrical device implanted in the chest. The device and electrodes painlessly stimulate specific areas in the brain that control movement in a way that may help stop many of the movement-related symptoms of Parkinson’s, such as tremor, slowness of movement, and rigidity.

Other therapies that may help manage Parkinson’s symptoms include:

While the progression of Parkinson’s is usually slow, eventually a person’s daily routines may be affected. Activities such as working, taking care of a home, and participating in social activities with friends may become challenging. Experiencing these changes can be difficult, but support groups can help people cope. These groups can provide information, advice, and connections to resources for those living with Parkinson’s disease, their families, and caregivers. The organizations listed below can help people find local support groups and other resources in their communities.

For more information about Parkinson’s disease 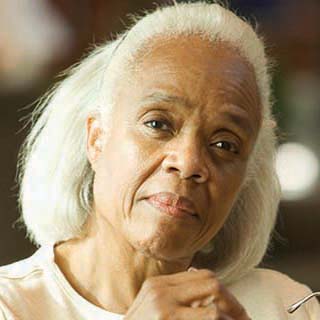 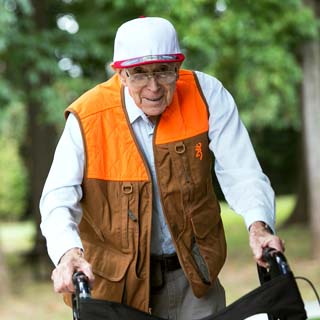 Falls and Fractures in Older Adults: Causes and Prevention 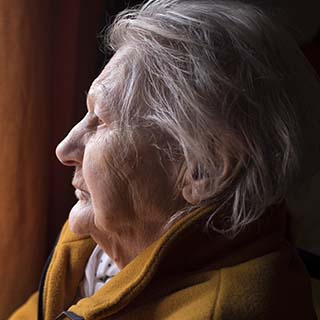